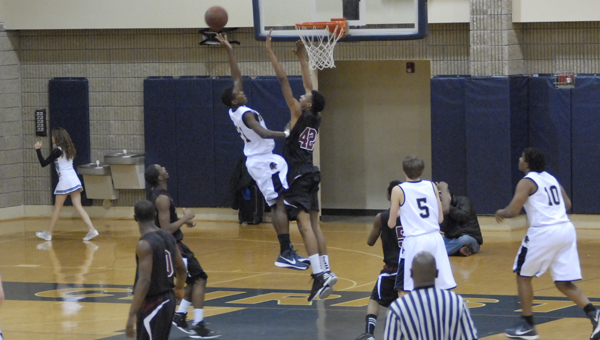 NORTH SHELBY – Despite only scoring five points in the third quarter, the Sylacauga Aggies forced the Briarwood Christian Lions into two overtimes to take a 58-54 win Jan. 31.

Briarwood (13-13) held a 3-point lead at the half, but began to pull away in the third quarter. Sylacauga cut the Lions’ lead to two twice early in the third, but Briarwood closed the quarter on a 5-1 run to take a 31-25 lead into the fourth.

Sylacauga went on an 13-6 run to begin the fourth to take a 40-37 advantage – their first lead since scoring the first points of the game – with two minutes left in regulation. The Lions’ William Lathem outscored the Aggies 3-2 in the last two minutes to tie the game 42-42. With 18 seconds left in the fourth, Lathem had a chance to win the game for the Lions but the shot didn’t fall as the game was sent into overtime.

Briarwood’s David Loveless gave the Lions an early 45-42 lead in the first overtime when he hit a three from the right wing. Sylacauga battled back and outscored the Lions 5-2 in a span of 53 seconds to send the game into a second overtime.

Sylacauga’s Hayden Ellis hit his fifth 3-pointer of the game to begin the second overtime to give the Aggies a 50-47 lead. Ellis sparked an 8-2 run as the Aggies took a 55-49 lead with 1:32 remaining.

Justin Brown cut the Aggies’ lead to two with a 3-pointer from the left wing, but Sylacauga sealed the 58-54 win with a 3-0 burst in the final 43 seconds.

Brown led all scorers with 17 points for the Lions. Lathem finished with eight points and Will Imbusch scored seven points.