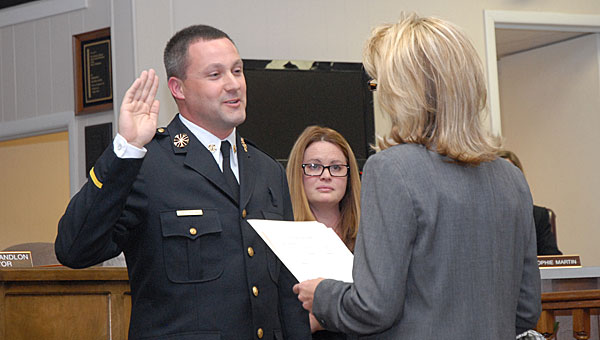 Interim Alabaster Fire Chief Jim Golden moved into the position full-time when he was appointed as the city’s fire chief during a Feb. 4 City Council meeting.

During the meeting, the council voted unanimously to appoint Golden as the fire chief after Alabaster Mayor Marty Handlon recommended him for the position. Golden replaced former Fire Chief Frank Matherson, who retired on Nov. 1, 2012.

After the council voted, Golden, his wife and son came to the front of the room as Handlon swore him in. About 15 of the city’s firefighters attended the meeting, and the crowd at the Alabaster City Hall Annex gave Golden a standing ovation.

“Our department has a lot of great assets, but the greatest asset is people,” Golden said after the meeting. “I am thankful for the opportunity to lead them going forward. This is a special opportunity, and I am really excited about it.”

Handlon, City Administrator George Henry and Pelham Mayor Gary Waters – who served as Pelham’s fire chief for many years – interviewed Golden and four other candidates for the fire chief position after a panel of five Alabama fire chiefs chose the top five candidates out of the 29 original applicants.

“I want to publicly thank Mayor Waters for helping us with that interview process,” Handlon said. “Jim’s passion for Alabaster just put him over the top.”

Council President Scott Brakefield said the city had “strong” applicants for the position, and said Golden faced stiff competition for the spot.

“Your passion for the city is what strikes me,” Brakefield told Golden.

During their comments at the end of the meeting, the council members praised Golden for his years of service to the city.

“I can’t think of a better person to serve in that role right now than Jim Golden,” said Ward 2 Councilman Bob Hicks.

Tracker and Kalie want to share their love with…