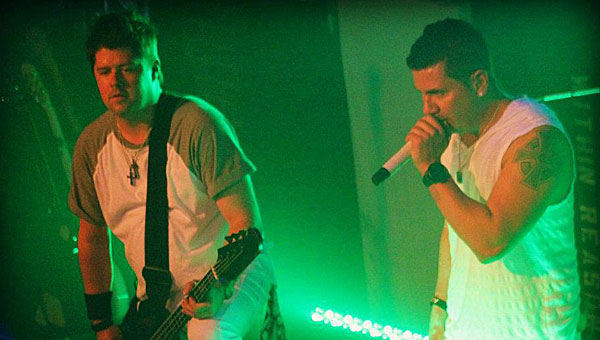 Within Reason bassist David Koonce, left, a Pelham High School alumni, will perform with his band at the Grammy Live event on Feb. 9. (Contributed)

A 1999 Pelham High School graduate will perform for a national stage on Saturday, Feb. 9 after his band recently won “The Gig of a Lifetime Contest.”

PHS alumni David Koonce, the bassist for the Birmingham-based band “Within Reason,” will take the stage with his band at 9 p.m. as part of the Grammy Live event. Grammy Live is a three-day event leading up to the 2013 Grammy Award ceremony, which will be held in Los Angeles on Sunday, Feb. 10.

As a result of winning the contest, members of Within Reason were flown out to Los Angeles in late January, will take part in a Microsoft television commercial and will take home Microsoft Surface tablets.

“The guys are very excited to be representing their home state on such a large stage,” Koonce said, noting the Microsoft Surface tablet commercial the band took part in will be aired during the Feb. 10 Grammy award ceremony.

Locals can watch Within Reason’s performance at Grammy.com, CBS.com or by downloading the free Grammy Live mobile app available for iOS and Android devices.

Within Reason performs “a fusion of musical genres, all of which rock,” according to the band’s website. The band has performed with major acts such as Bret Michaels, Staind, P.O.D. and Blues Traveler, and sold more than 135,000 online song downloads in 2011.