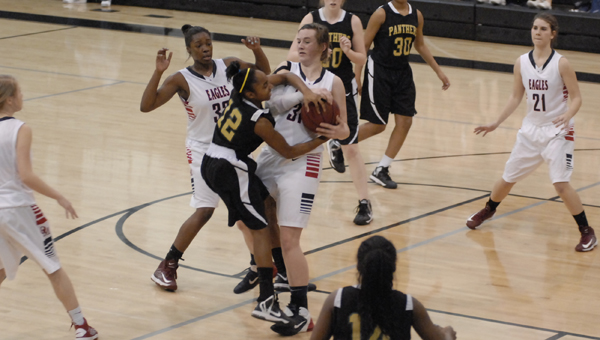 Pelham's Erykah Hall and Oak Mountain's Madison Pierce fight for the ball in the second half of the Lady Eagles' 54-19 victory Feb. 7 at Spain Park High School. (Reporter photo/Mickel Ponthieux)

HOOVER – The Oak Mountain Lady Eagles took control of their Class 6A, Area 8 semifinal game early to pick up a 54-19 victory over the Pelham Lady Panthers Feb. 7 at Spain Park High School.

“I thought we played well,” said Oak Mountain head coach George Minoso. “We executed better on offense and our zone (defense) worked out extremely well. Everybody stepped up tonight.”

The Lady Eagles closed the first on a 6-0 run to take a 13-2 lead into the second quarter.

Madison Pierce led Oak Mountain on a 8-0 run led with a pair of baskets by Madison Pierce to take a 21-2 lead two minutes into the second quarter. Pelham’s Emily Jackson scored the Panthers’ next five points from the free throw line to make the score 25-7 late in the first half.

Oak Mountain opened the second half on a 10-2 run to take a commanding 39-12 lead midway through the third. Pelham held the Lady Eagle scoreless while Shelby Cost hit three free throws in the last second of the quarter to make the score 39-15 headed into the final quarter of play.

Pierce scored three straight baskets early in the fourth to give Oak Mountain a 47-19 lead. The Lady Eagles sealed the win by scoring seven unanswered points.

With the win, Oak Mountain advances to the area championship game where they will take on Spain Park. Also, the Lady Eagles have locked up a spot in the sub-regional tournament next week.

“Our goal was definitely to play another game and we got that tonight,” said Minoso.