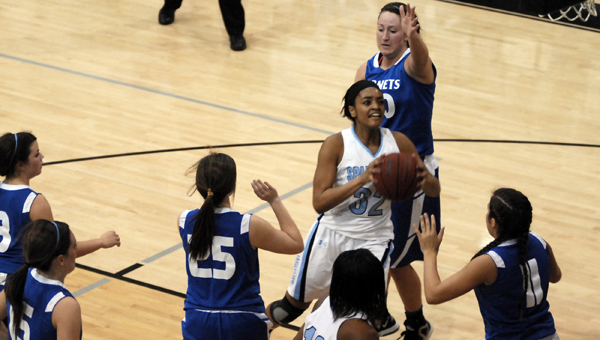 Spain Park's Victoria Baldwin drives the lane for two of her 13 points in the Lady Jags 57-32 win over Chelsea at the Class 6A, Area 8 tournament Feb. 7. (Reporter photo/Mickel Ponthieux)

HOOVER – The Chelsea Lady Hornets rallied an erased an eight-point deficit in the first half only to see the Spain Park Lady Jags pull away in the third for a 57-32 win in the Class 6A, Area 8 semifinals at Spain Park High School.

Chelsea (7-17) trailed as much as eight points twice in the first half, but closed the second quarter on a 6-2 run to pull within four, 17-13 at the half.

Chelsea’s Amanda Mock scored the first four points of the third to even the game 17-17.

That would be as close as the Lady Hornets would be able to get as Spain Park (21-8) answered with an 18-4 run to closed the quarter to take a 35-21 lead into the fourth quarter.

Chelsea’s Mock led all scorers with 18 points for the Lady Hornets.

Pelham's Erykah Hall and Oak Mountain's Madison Pierce fight for the ball in the second half of the Lady Eagles'... read more