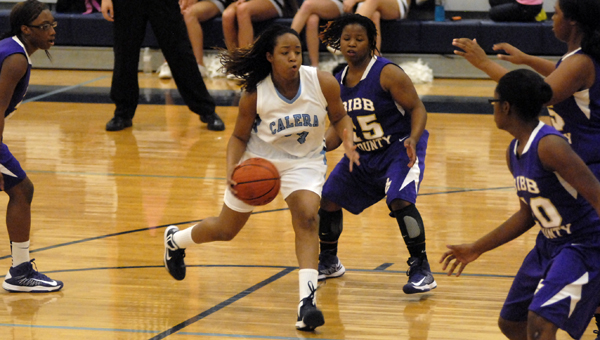 Calera's Jeda Doss led the Lady Eagles with 13 points in their 41-25 victory for the Class 4A, Area 7 championship over Bibb County Feb. 9. (Reporter photo/Mickel Ponthieux)

CALERA – The Calera Lady Eagles responded after a disappointing second quarter to take a 41-25 victory over Bibb County to win the Class 4A, Area 7 championship Feb. 9 at Calera High School.

“We were very fortunate to win,” said Calera head coach James Knowles. “Hopefully we learned a very valuable lesson cause if we play like this next week we will be done for the season.”

The Lady Eagles (19-8) took a 9-3 lead in the first quarter, and led as much as 13-5 in the second. Bibb County forced Calera to turn the ball over 11 times in the remaining five minutes of the first half. Bibb County took advantage and scored eight unanswered points to even the game 13-13 at the half.

Calera opened the second half on a 10-1 run led by Jeda Doss. Doss went 7-for-10 from the free throw line to lead the Lady Eagles to a 26-20 advantage heading into the final quarter.

Bibb County picked up two baskets to start the fourth to keep the deficit at six, 31-25 with four minutes left in the game. Calera took advantage of poor free throw shooting and went 8-for-10 from the line while Bibb County went 0-for-10 allowing the Lady Eagles sealed the 41-25 victory.

Knowles attributed the turnaround in the second half to a change in the Lady Eagles’ defensive scheme.

“We changed defenses to make them shoot the ball from the perimeter,” said Knowles. “I think we picked up the pressure on them. We moved the ball better on offense.”

Doss led all scorers with 13 points for Calera, all of which came from the free throw line. Perri Duncan added 10 points for the Lady Eagles.

Calera’s Duncan, Tyesha Haynes and A’kia Harris were all named to the all-tournament team.

The Lady Eagles will take on Corner on Thursday at home.

FROM STAFF REPORTS HOOVER – The Spain Park Lady Jags captured the Class 6A, Area 8 championship with a 61-44... read more