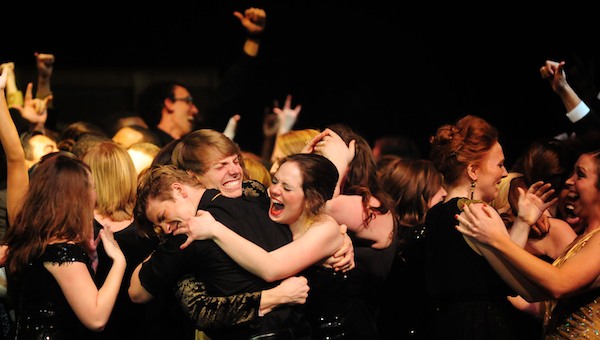 Members of the Gold Side celebrate after winning College Night at the University of Montevallo on Feb. 9. (Reporter Photo/Jon Goering)

MONTEVALLO – The Gold team won a “sweet” victory after their production during the final College Night event Feb. 9.

The 94th annual College Night is the longest running collegiate tradition in the United States, according to Student Government President Ashley Lowe. The Purple side has won 48 College Nights, and Gold has won 45, which includes a three-year streak.

Both Purples and Golds chanted and sang across Palmer Auditorium before the shows, which included references to the teams’ mascots – lion for Gold and cow for Purple. The teams then followed the tradition of circling around the room, joining hands and singing either team’s song. Each team held up hand signs – thumbs up for Gold and two-fingered “peace signs” for Purple.

The Gold production, “A Sweet Sensation,” was set in Briarsfield, the “candy capital of the world.” The founder of McElroy’s Sweets candy factory had passed away, and his son, Theo McElroy, or the “heir to the candy throne,” was hesitant to take over the family business.

The owners of the second-best candy company, Starla and Neil Fletcher, devised a scheme to steal the McElroy secret candy recipes with the help of a witch doctor named Vanya. The three villains utilized the town’s new jukebox to amplify a spell to force the town’s residents to dance while the Fletchers stole the recipes.

In the end, Theo McElroy, played by Phillip Azbik, saved the townsfolk by uncovering the antagonists’ plans.

“I’m looking forward to seeing everyone, everyone in the cast, leave everything on the stage – blood, sweat and tears,” Gold co-leader Clark Maxwell said before the musical performance.

“I’m very excited and ready for a Purple Victory,” Shirley said. “The strongest theme in the show is that we are family, and we will stand by each other.”

The Purple performance, “Taking Up Space,” featured the Space Cadets of West Seattle, or “Space COWS,” and their pompous captain in the year 3013.

After landing on the plant Rekcabeur, a member of the crew is captured by the alien Chthonians. The aliens developed a “golds device” to age and then enslave the human race.

The captain and crew decide they “never leave a man behind,” and rescue their captured crewmember to save the day.

“I feel like it was our most solid performance,” said Michael Cleary, who played Officer Alan Anyguy, after the show. “I’ve never felt so in sync with the cast before this performance.”

After the performances were over, the teams took up chanting and singing in anticipation of the winning announcement.

Lowe listed three attributes of the university before relating them to a “triple shot of victory,” which signaled a Gold Victory.

“It was a great event,” Stewart said as he was handed The Alabamian student newspaper announcing Gold’s win.

“I’m so excited. I’m excited and I’m screaming,” student KB Avery, who played the Gold production’s witch doctor, said after the announcement. “It’s the best feeling of my life. We did this together; we worked together. We did it, we did it!”