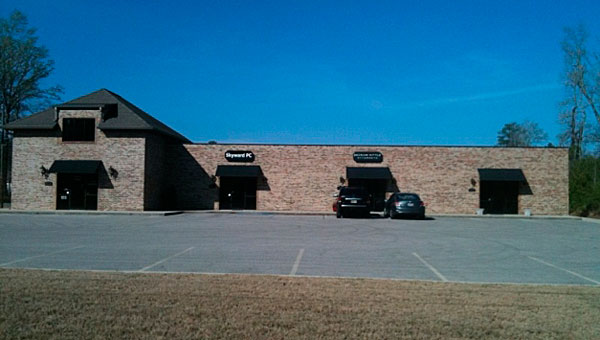 The Alabaster Board of Education voted to lease office space in this building off Alabama 119 to temporarily house the city's central school office. (Contributed/Loopnet.com)

The Alabaster Board of Education’s central office soon will have a temporary home on Alabama 119 after the city’s School Board approved the location during a Feb. 11 meeting.

The School Board still must approve a formal contract before the lease is finalized.

“As time evolves, we do need a home. We need a place where the citizens can say ‘That’s where the board is located,’” said Alabaster Interim School Superintendent Dr. Phillip Hammonds, who has been working out of an office in the Alabaster Parks and Recreation Department’s Depot building for the past few months.

Quarles said he recommended the Park Forest location after he and Hammonds “looked at all the available sites in Alabaster,” and said the space is affordable, centrally located and able to handle between nine-15 central office staff members.

The School Board will pay $10 per square foot for the office space, which will come to $2,219.60 per month. Quarles said the board will “look for a more permanent location” in the future.

All Alabaster School Board meetings will still be held at the Alabaster Senior Center.

In other business, the School Board:

-Announced it is working with the Alabaster mayor and City Council to help fund school resource officers at Meadow View Elementary, Creek View Elementary and at the Thompson Intermediate-Sixth Grade Center building.

The city currently has school resource officers at Thompson High and Thompson Middle.

-Approved a contract for incoming Alabaster Chief School Financial Officer Sarita Tapscott, who was hired by the School Board in January. Tapscott, who currently is the CSFO with Hartselle City Schools, will begin her job with Alabaster on March 1.

-Approved job descriptions for a child nutrition program specialist and a central office secretary. The positions will now be advertised statewide before the BOE works to fill them.

-Voted to enter into a contract with the Alabama Association of School Boards to help develop a policy manual for the Alabaster school system.

-Announced it will start holding regular work sessions on the fourth Monday of each month at 6 p.m. at the Alabaster Senior Center.

Everyone wins with Special Equestrians

Volunteers and horses work together to help people with disabilities. By DALE BRAKHAGE/Community Columnist Imagine getting a little exercise in the... read more