The man, whom Sheriff Chris Curry estimated to be 21 years old, entered the school at 3:10 p.m. carrying a semi-automatic handgun. The gunman’s identity will not be released until investigations are complete, Curry said.

A deputy on campus, who formerly served as the Chelsea High resource officer, reacted “immediately” and began negotiating with the gunman, which proved successful in about 20 minutes, Curry said. No students were injured. 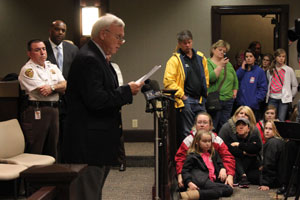 Sixth grader Holli Lovoy said she was talking with her friends in the gym when teachers ran in, yelling and moving students to different rooms.

“Everybody was really scared. I thought I was going to die,” Lovoy said. “I heard he was holding people in the locker room, then we moved to the football field.”

Sharon Arant, Lovoy’s grandmother, said when her granddaughter didn’t come home on the bus, she wasn’t overly concerned at first.

“I finally decided I had to find out,” Arant said. “I heard the report on the radio, and I just started bawling. I think that was everyone’s reaction.” 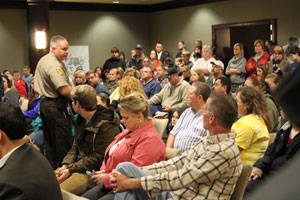 Dale Greene’s daughter was one of the students held by the gunman against her will.

“He waved a gun near her head, and she ran out screaming,” Greene said.

Greene received a text message from his son stating his daughter had texted him about the incident.

“I called 911, then drove from Fairfield (at work) to pick them up,” he said. “You’d never think this would happen in Chelsea.”

Curry said he will place four deputies in CMS and Chelsea Intermediate for the foreseeable future, but was undecided about how long the additional deputies would remain in the schools.

As a precaution, a bomb detection dog and team swept the school for explosives, Curry said.

“We have no idea of any motive at this point,” Curry said. “We’re confident he was operating alone.

“The school will operate as normal tomorrow and open at regular time,” he added. 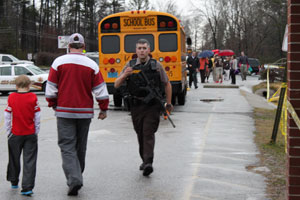 Shelby County District Attorney Robby Owens said he plans to ask for the maximum sentence for the gunman, which would include multiple counts of kidnapping.

In response to questions regarding the school’s security, Fuller said the school system will review all 40 county schools’ entrances, exits and locking mechanisms. The Shelby County Board of Education will fund any renovations to the entrance of schools to promote safety, Fuller said.

Fuller also announced his intention to start a new system of texting, calling and emailing parents for emergency situations, but the process will take time to bid out and implement.

“The commission needs to think, ‘This isn’t Connecticut.’ Today, it is in Shelby County, Chelsea, Alabama, and it needs to raise the ears of the commission,” Niven said.