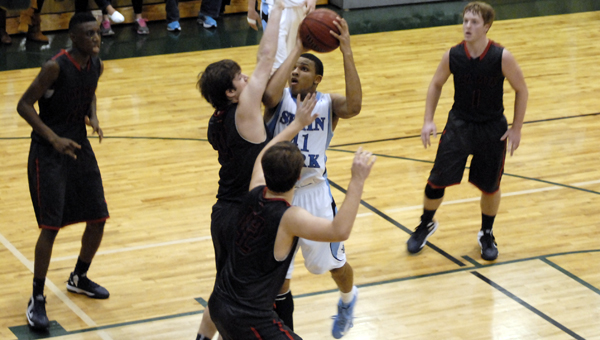 The Jaguars' Deion Wright fights his way to the basket in Spain Park's 32-22 victory over Oak Mountain in the Class 6A, Area 8 championship game at Pelham High School Feb. 11. Wright was named the Area 8 tournament MVP. (Reporter photo/Mickel Ponthieux)

PELHAM – The Spain Park Jaguars overcame a 12-minute scoreless drought to claim a 32-22 victory over the Oak Mountain Eagles in the Class 6A, Area 7 championship game Feb. 11 at Pelham High School.

“We started out hot and got the momentum early and they chipped away,” said Spain Park head coach Neal Barker. “I’m so proud of my guys for finding a way to hang in there. They are a good group of kids and I’m proud of them.”

Spain Park closed the first quarter on a 9-2 run to take a 14-4 lead while capitalizing on three Oak Mountain turnovers in the last two minutes.

The Eagles responded and allowed only three points in the next two quarters of play. Oak Mountain held the Jaguars scoreless throughout the second quarter and cut the double-digit deficit in half trailing 14-9.

Oak Mountain’s Pierce Clarke hit a three two bring the Eagles within two before the Jaguars scored their first basket in over a quarter of play.

“We buckled down and got a little more active and did a better job of keeping the ball out of the post,” said Eagles’ head coach Chris Love on holding the Jaguars scoreless.

Spain Park’s Jonathan Toups converted on a 3-point play to give the Jaguars a 17-12 lead and ending a drought that lasted more than 12 minutes of game time.

Clarke hit a pair of three’s to lead the Eagles on an 8-0 run to take a 20-17 lead late in the third quarter, their first since scoring the opening basket of the game.

DeShawn Giles extended the Oak Mountain lead to five to start the final quarter, but Spain Park began to climb back into the game. Austin Jones and Drew Morgan each scored a basket from beyond the arch to lead the Jags on a 9-0 run to take a 26-22 lead with under four minutes to play.

The Eagles were forced to foul to conserve time in the final two minutes of play and Spain Park sealed the win going 6-for-9 from the free throw line down the stretch.

“We turned the ball over,” said Love. “We just had a real bad two-minute period (in the fourth) that they turned into buckets.”

Clarke led all scorers with nine points, all of which came from 3-point range. Giles finished with seven points for the Eagles.

After winning the area championship, the Jaguars will host Wetumpka while the Eagles will travel to Thompson to take on the Warriors in the Class 6A sub-regionals Feb. 11.

“You are not going to find a bad team in the playoffs,” said Barker on playing Wetumpka. “They are going to be good and I’m glad that we have the opportunity to have them at our place.”

By GRAHAM CARR / Special to the Reporter ALABASTER – After a slow start, the Thompson Warriors came alive in... read more