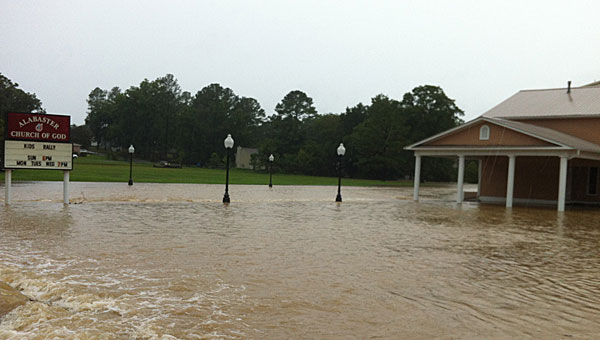 Maps recently released by the Alabama Office of Water Resources will update flood zones in Alabaster after they go into effect this spring. (File)

Alabaster residents can use information recently posted on the city’s website to determine if their property lies in a flood zone in a new Alabama Office of Water Resources map, according to Alabaster officials.

During a Feb. 4 meeting, the City Council set a public hearing to update the city’s flood damage prevention ordinance to reflect the new Office of Water Resources map, which will go into effect this spring, said Alabaster City Administrator George Henry.

The public hearing will be held during the council’s Feb. 18 meeting, which will begin at 7 p.m. at the Alabaster Municipal Annex building.

The city’s current flood maps were approved in 2006, and the new maps will change some of the city’s flood zoning based on studies and information gathered by the Office of Water Resources. The flood map update is federally funded.

According to information posted on the Alabaster website, a flood map is a “tool used to determine the different flooding risks in a community,” and “designates special flood hazard areas” with a 1 percent or greater chance of flooding annually.

Along with information detailing the flood map update process and the different types of flood zones, the city also posted links to FEMA and the Office of Water Resources near the top of the “Flood Plain Updates” page on the Alabaster website.

By using the links, Alabaster residents can type in their addresses and receive the flood zone status of their property. To access the links, visit Cityofalabaster.com/residents/flood-plain-updates.

Henry said all residents have access to flood insurance, regardless of their flood zone classification, and said some are required to have flood insurance either by the federal government or by their home lending institution.

“Flood insurance is often thought of as to protect against a river or creek rising, but an insurance company defines it very differently,” Henry said. “Most to the point, it means any liquid intrusion into the structure.”