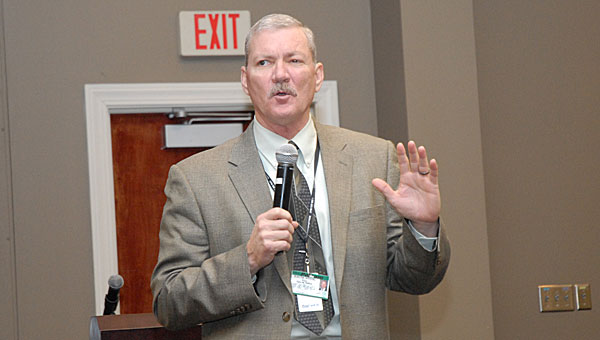 Pelham Mayor Gary Waters speaks during a recent Pelham Business Alliance meeting at the Pelham Civic Complex. The city will hold a similar meeting for Pelham residents on March 7. (File)

Pelham Mayor Gary Waters and Councilman Maurice Mercer will give city residents a chance to voice their ideas for the city during a resident “town hall” meeting on March 7.

The meeting will begin at 6:30 p.m. at the Pelham Civic Complex and Ice Arena, and is open to all Pelham residents.

During the meeting, Waters and Mercer will seek feedback from residents on moving the city forward, Waters said.

“Typically what happens in Pelham is we have a town hall meeting only when we are in a crisis,” Waters said. “But this meeting was not generated by any incident. We just want to allow citizens to have a voice.”

Waters said the meeting was the “brainchild” of Mercer, who suggested the city host quarterly citizen meetings while he was campaigning for office in 2012.

The town hall meeting will come a little more than a month after the city held a meeting at the Civic Complex to gather feedback from the city’s business owners. The January business meeting drew about 75 attendees.