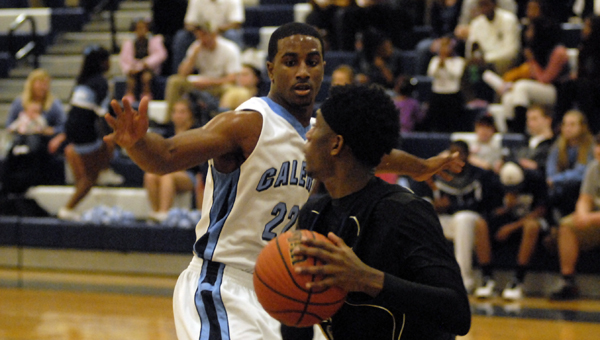 Calera's Ronnie Clark guards Carbon Hill's Brandon Hill from inbounding the ball during the Eagles' 72-60 loss to the Bulldogs in their Class 4A sub-regional game Feb. 15. (Reporter photo/Mickel Ponthieux)

CALERA – The Calera Eagles rallied in the third to cut into the Carbon Hill Bulldogs halftime lead, but was unable to regain the lead as they fell 72-60 in the Class 4A sub-regionals Feb. 15 at home.

“They (Carbon Hill) brought a lot of energy and we weren’t able to match it,” said Calera head coach Robert Burdette. “We played extremely hard in the area tournament and – for whatever reason – we didn’t bring that same level of intensity and they did.”

The Bulldogs built on the advantage in the second when they held Calera to just four baskets to take a 30-21 lead at the half.

Calera’s Ronnie Clark scored nine points in the second half and led the Eagles on a 9-2 run to cut the Carbon Hill lead down to three, 37-34, late in the third quarter. The Bulldogs responded right back with an 11-2 run for a 48-36 lead into the fourth quarter with all the momentum.

The Eagles pulled as close as six late in the fourth when they went on a 10-3 run for a 59-53 Carbon Hill advantage. The Bulldogs quieted any sort of comeback when they went 9-for-9 from the free throw line in the last three minutes of the game to seal the victory.

Carbon Hill’s Brandon Smith led all scorers with 28 points – 16 of which came in the second half.

Clark led the Eagles with 20 points with 16 in the second half. James Gayden scored 10 points while Henry Davis added seven points for Calera.

Through the ups and downs of the season, Burdette said he saw his Eagles get better with each game. The Eagles ended the season as the Class 4A, Area 7 tournament champions as the No. 3 seed in the tournament.

“These guys gave a lot,” he said. “We got better as the year went along.”

Free t-shirts to be handed out at nationally-televised game