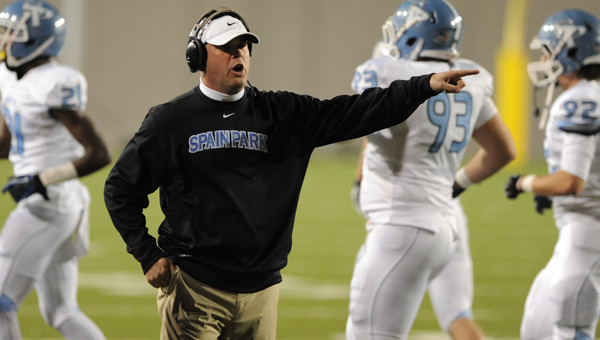 “The Spain Park family is very excited and very happy for Coach Lindsey as this opportunity gives him the chance to work and coach at a major Division I college football program,” Spain Park athletic director Patrick Kellogg said in an email release.

“He (Malzahn) called me early in the week and asked me about the opportunity and it worked its way from there,” Lindsey said on the offer.

Lindsey was unable to define his role in his new position at Auburn and noted that there were limits on what he could comment on per NCAA regulations.

Lindsey informed his team and coaches the morning of Feb. 16 that he accepted the position at Auburn.

“It was a hard meeting with the team just because these are special bunch of kids at Spain Park,” said Lindsey. “As tough as it was, it was a good time too.”

Lindsey said that many of the Jaguars met with him after his announcement and were “all very supportive” of his decision to leave Spain Park.

“Coach Lindsey is a great person, family man; mentor to student-athletes, and most importantly a great educator. He will be greatly missed,” Kellogg added.

Lindsey led Spain Park to its first region championship in school history in 2012 with an appearance in the Class 6A quarterfinals with a record of 10-3.

“Anytime you leave somewhere you want to think you left it better than when you got there,” Lindsey said on his mark on the Spain Park football program. “I think we created some very good momentum for the program and good relations with the faculty and administration there. We have a lot of really good people there as coaches, and that’s what’s special about Spain Park.”

Lindsey came to Spain Park after a season at Troy University as the quarterbacks coach. Prior to joining Troy’s coaching staff, he was the head football coach at Lassiter High School in Marietta, Ga. from 2008-2009.

Lindsey coached former Auburn tight end Phillip Lutzenkirchen at Lassiter, who tweeted on the Auburn hire. “Chip Lindsey to Auburn is the best new since America developed tiVo,” he tweeted. “Wish I had four more yrs!”

Spain Park will begin its search for a new head coach to build on what Lindsey has built in his time as the Jaguars head coach.

“Our goal now is to find a head football coach that embodies the same caring and relational persona that Coach Lindsey grew at this football program,” the release stated.

Lindsey said that the program would continue to excel under the new head coach.

“I think the program will continue to do really well in years to come,” said Lindsey. “I was just glad I was able to be a part of it.”

FROM STAFF REPORTS The Calera Lady Eagles jumped out to a huge lead and carried the momentum to a 53-34... read more