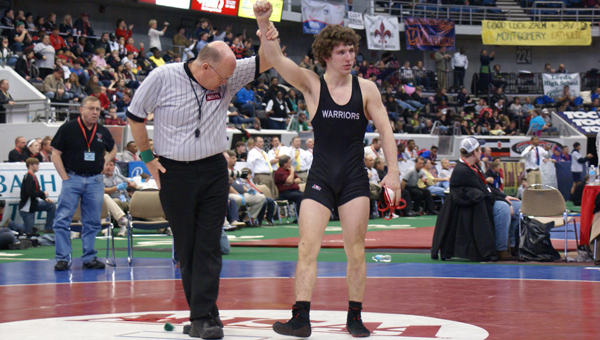 The Warriors returned to Alabaster to a celebration reception to honor their astounding achievement.

“It was a different experience this time,” said Thompson head wrestling coach Shawn Weltzin. All 11 of the Warriors that qualified for the state tournament scored points to finish with 196 points for the title – just seven head of Vestavia Hills.

The Warriors matched their total of wrestlers in the finals as last season with seven, with Gilliland and Hall each winning state titles this year.

Gilliland’s road to the state championship was a rather quick one as his longest match took less than three minutes before his final match. The Thompson junior pinned his first three opponents to earn the right to wrestle for the championship.

“He was wrestling the best he could at the best possible time,” Weltzin said on Gilliland’s performance. “You want to try to peak at the right time, and he definitely did.”

Gilliland fought Prattville’s Caden Mcwhirter to a decision and won the match 4-2 for the 6A 138-pound state championship. He finished the season with a record of 51-5.

Hall – a senior – becomes the most decorated Thompson wrestler in the six-year history of the program. He has won three state titles, including two in the past two seasons with a third place showing his first season at Thompson as an eighth grader.

“He’s been one of those guys that’s always been a contributor at the state level,” said Weltzin. “We needed his consistency tonight to clinch it for us.”

Hall won his first two matches by technical falls before downing Landon Edwards of James Clemens by an 8-2 decision in the semifinals. Hall defeated Smiths Station’s Tim Hester by a technical fall to win the 6A 138-pound state title and finished his senior season 32-1.

TJ Rayam, Cahaman Holder, Demario Haynes and Riley Pike each wrestled for a championship on Feb. 16 and took the runner-up spot in their respective classes.

Reed Jacks battled his way through the consolation bracket to take third in the 6A 120-pound division. Jacks won his first match by a pin, and then fell in overtime in the championship quarterfinals. He won his next three matches by major decision to advance to the third place match where he defeated Vestavia Hills’ John Hill by a 3-2 decision.