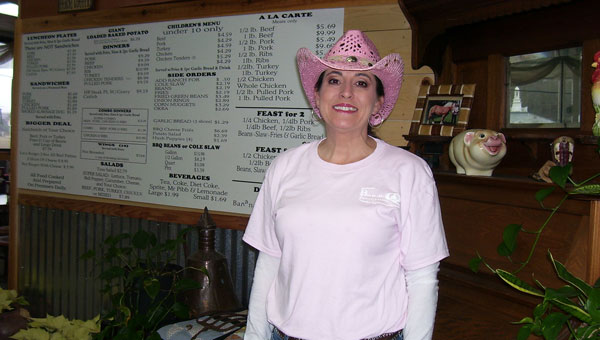 Tammie Smith with her mother’s antique organ, part of the décor at Willard’s Bar-B-Q Junction, where she uses a prize-winning bean recipe developed by a member of her husband Robert’s family over 30 years ago. (Contributed)

She has no culinary background, Tammie Smith of Willard’s Bar-B-Q Junction in Chelsea said.

But you would never guess it from the food she serves.

Ken and our daughter, great fans of smoked chicken wings, declared Tammie’s the best they ever tasted. Our 17-month-old great-granddaughter ate them like they’re the best food she ever tasted.

“Our recipes belong to Jimmy Willard, my husband Robert’s relative who has been in the barbecue business over 30 years,” Tammie said. “The baked beans were voted ‘Best Beans in Jacksonville.’ He has three places in Jacksonville, Fla.”

Tammie said her background is in information technology while Robert has worked as a director of logistics with Flowers Baking Co. for almost 30 years. Tammie has contracted with Blue Cross and AT&T, among other companies.

“Our only restaurant experience was working part-time waiting tables and washing dishes as teenagers. But I learned one important aspect from preparing meals for my family,” she laughed. “We have two boys, (Patrick, an Orlando pharmacist; Hunter, a CMS student), and I learned boys love to eat meat.”

So they pile on the meat at Willard’s.

They get lots of kids from Chelsea High, she said, who love their Double Angus Burger. At student’s requests, they began making triple-burgers.

The Smiths moved to Chelsea in 2005. They decided to go into the barbecue business after his father in Jacksonville was diagnosed with terminal cancer in 2011.

“We made lots of trips down there that year,” Tammie said, “I always picked up ribs at Willard’s and we talked to Jimmy about opening one in Chelsea.”

She said her mother, Brenda Watson, who worked in the restaurant business for many years, helped get their restaurant up and running, but has returned home to Florida.

The food is freshly prepared every day, Tammie said.

Hours are Monday-Saturday 11 a.m. to 8 p.m. and Sunday 11 a.m. to 4 p.m., but she hopes to extend Friday and Saturday hours and begin serving breakfast: “Home-cooked biscuits, gravy, grits and eggs-over-easy.”