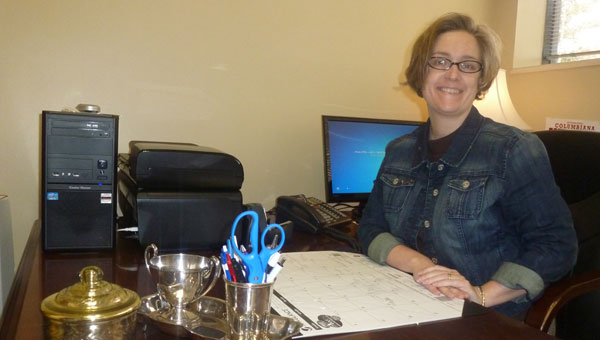 Helen Phillips Dean has a new office and title at Columbiana City Hall – Columbiana’s marketing coordinator. Dean has a great challenge ahead – to improve communication between city hall and its citizens and to help bring more people and businesses to Columbiana.

Dean is the daughter of Helen Harrison Phillips (Columbiana) and Tom Phillips (Birmingham) and granddaughter of Karl C. and Mildred Bennett Harrison (Columbiana). Karl Harrison was an attorney, president of First National Bank of Shelby County and founder of the Karl C. Harrison Museum of George Washington in Columbiana, the largest collection of Washington’s memorabilia outside of Mt. Vernon.

Mildred Harrison was Columbiana’s first librarian, charter member of the Columbiana Culture Club, Regent of the DAR David Lindsay Chapter and founded Shelby County’s library system for which the Mildred B. Harrison Regional Library is named.

Her paternal great-grandfather was Shelby County’s Probate Judge Leon Columbus Walker whose glasses and gavel are in the Shelby County Museum.

“I have deep roots in Columbiana and Shelby County,” said Dean. “My earliest recollection was spending summers with my grandparents and walking to town. Columbiana is a walkable, caring city with a sense of community. Mayor Handley loves Columbiana, as I do, and has the drive, passion, and plan to lead this city. He sets the bar high and has high expectations which push me beyond what I thought I could ever do. I am so blessed to work for this city that I love.”