MONTGOMERY – The Shelby County Wildcats were able to keep up with the Sumter Central Jaguars and surged late to claim a 50-47 Class 5A Central Region semifinal victory Feb. 19 at Alabama State University’s Dunn-Oliver Acadome.

“It was a really good game,” said Wildcats’ head coach Torry Brown on the win. “Sumter Central has a really good team. We just wanted to stay in the game and hang around and have a chance to win in the fourth quarter.” 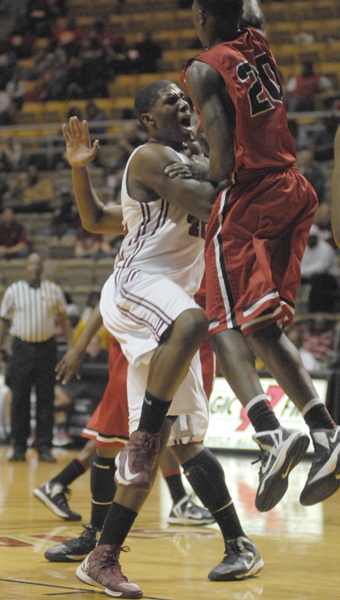 Shelby County senior Tyler Madison drives the lane for two of his game-high 24 points in the Wildcats’ 50-47 victory in the Class 5A Central Region semifinal at Alabama State University. (Reporter photo/Mickel Ponthieux)

The Jaguars led as much as five points to start the second half, but the Wildcats outscored Sumter Central 10-5 to even the game 32-32 heading into the final quarter.

Shelby County fought to tie the game four times to start the fourth before taking their first lead of the second half when Emmanuel Hall made a second-chance basket to for a 43-42 advantage.

“We wanted to try to get the ball to the glass and give our big guys a chance to rebound,” said Brown on the second-chance opportunities.

The Wildcats advance to the 5A Central Region finals where they will play Paul Bryant Feb. 21 at 4:40 p.m.