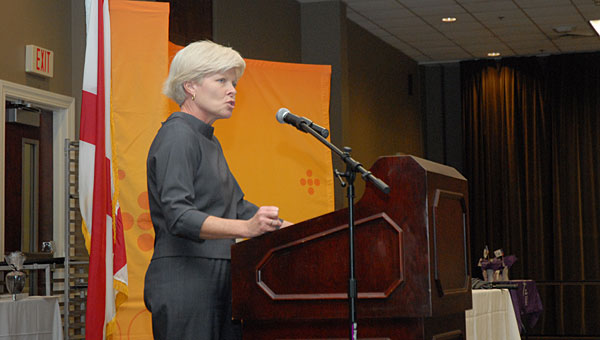 Allison’s comments came during a Feb. 20 Greater Shelby Chamber of Commerce lunch at the Pelham Civic Complex, during which she presented the Commission’s “state of the county” address.

“I’d like to address something that’s been in the news a lot lately, and that’s school security,” Allison said near the end of her speech. “I can stress to you that there is not one commissioner who doesn’t want our schools to be as safe as they can be.”

The lunch came a little more than a week after the Shelby County Sheriff’s Department arrested 21-year-old Ryan Sims and charged him with holding five Chelsea Middle School students hostage at gunpoint in one of the school’s locker rooms.

Allison said 11 of Shelby County’s 17 cities contain 44 of the county’s 47 schools, and said the cities “retain police jurisdiction of those schools.” Allison said the Commission acts on school safety recommendations from the Shelby County School Board.

“It’s going to take all the players sitting down at the table to see how we can address this (school safety issue). We have to determine who all of the stakeholders are,” Allison said. “We are going to have to be very creative in addressing this problem.

“It’s not just writing a check. If it was that simple, the Commission would have already done it,” Allison added.

Also during her speech:

-Allison said the county has seen an increase in the number of residential home building permits over the past six months, and said the rise could be a positive sign for the county’s economy.

“I’m not saying we’re back to where we were, but we have leveled out a little bit,” she said.

-Allison said the county’s Highway Department fund has been hit hard by the economic recession over the past few years.

“If you’re sitting in traffic today, I don’t see it getting much better,” Allison said. “One thing we’ve had to do in a difficult economic time is we’ve had to cut a lot from our Highway Department.”

From October 2009-early 2012, the county’s sales tax revenues dropped by about 8 percent “across the board,” Allison said. The revenue slump was affected heavily by fewer sales at the county’s five Walmart stores.

Despite the recent economic hardships, the county has retained the top Standard and Poor’s credit rating since 2004, Allison said.

“We were the first county in the state of Alabama to get the best Standard and Poor’s credit rating. Less than 1 percent of counties in the Southeast have that rating,” she said.