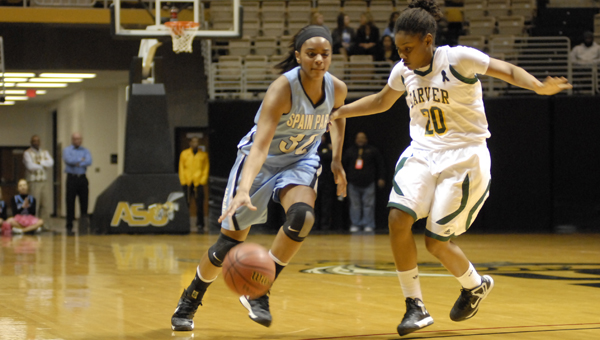 Spain Park’s Victoria Baldwin drives to the basket in the first half of the Lady Jags’ 47-31 loss to Carver-Montgomery in the Class 6A Central Region semifinals Feb. 20 at Alabama State University. (Reporter photo/Mickel Ponthieux)

MONTGOMERY – The Spain Park Lady Jags were unable to overcome cold shooting from beyond the 3-point line to fall to the Carver-Montgomery Wolverines 47-31 in the Class 6A Central Region semifinals Feb. 20 at Alabama State University.

Spain Park (23-9) finished the game shooting 2-for-26 from 3-point range while shooting just 24.5 percent from the field.

“One of the problems was that the game was so physical,” said Spain Park head coach Michael Chase. “We tried to get to the basket. I guess we needed to do a better job of drawing that foul.”

Spain Park’s shooting went quiet from that point and Carver took advantage. The Wolverines scored 10 unanswered points to take a 15-12 lead at the half.

The Lady Jags tried to get themselves back into the game with 3-point shots, but they didn’t fall. Carver capitalized and turned Spain Park’s misses into a 10-3 run to extend its lead to 29-19 at the end of the third.

Newton and Victoria Baldwin combined for baskets to cut the deficit to eight early in the fourth, but that would be as close as the Lady Jags would get. Carver scored seven unanswered points to gain a 15-point advantage. The Wolverines followed with a 5-for-6 showing at the free throw line in the last two minutes to seal the victory.

The loss caps a record-setting season for the Lady Jags despite losing four senior starters from the 2011-2012 season. Spain Park won a school-record 23 games and captured the Area 8 regular season and tournament titles. The Lady Jags also advanced to the regional tournament for the first time since 2006.

“I feel like this group probably reached or overachieved what their potential was,” said Chase. “As a coach, that’s all you want. You want to get to the end of the season and be playing your best and want to be getting the most out of what you got. I feel like that’s what we’ve got out of this group.”