CIS students ‘Rock Around the Clock’ 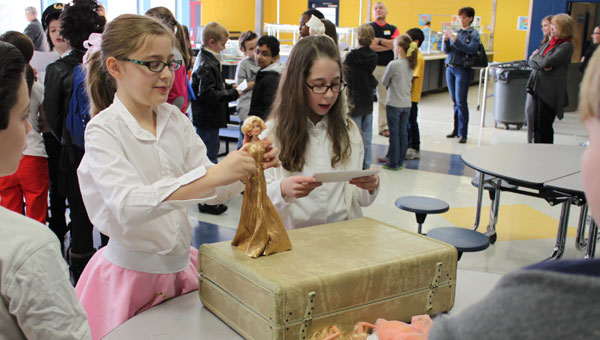 CHELSEA – Greasers and girls in poodle skirts filled the Chelsea Intermediate School cafeteria Feb. 20 as students opened their 1950s time capsules, which were full of Barbies, space items and other 1950s paraphernalia.

Emily Teel and McKenna Youngblood, both fourth graders, pulled Barbies out of their “time capsule” to teach their audience that Barbie was first created in the 1950s. They also talked about Marilyn Monroe, McDonald’s and poodle skirts, which they were wearing.

“The poodle skirt has many different colors, but light pink is the best,” Teel said, gesturing to her own skirt.

When asked where one could purchase a poodle skirt, Teel responded, “At Justice, the Gap or you could make them, like we did.”

Around 200 students will present their time capsules to the rest of the school from Feb. 19-26. The fourth and fifth grade students are a part of CIS’ Gifted Resource Class program, Gifted Education Specialist Leigh McLemore said. 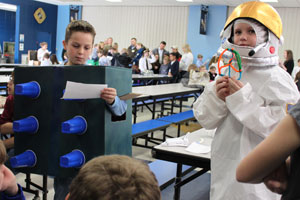 Mac Nicol dressed like a Lego block to show the toy kicked off in the 1950s, and Alex Gage dressed in memory of the 1955 space race. (Reporter photo/Christine Boatwright)

The 1950s is just one decade the GRC students are studying throughout the year.

Students had to make two objects to represent famous people or events of the 1950s. They also dressed in decade apparel and decorated their time capsules in 1950s fashion.

“We have one project a year to involve the community and school,” McLemore said. “We gave them suggestions and showed highlights of the decade.”

After their presentations, students were treated to Coke floats and hula hoop and dance competitions.

Students Mac Nicol, who dressed like a blue Lego block, and Alex Gage, who donned an astronaut uniform, taught about the popularity of the peace sign in the 1960s and the space race, which kicked off in 1955.

“They were racing rockets to see who could get to space first,” Gage said, noting the Soviet Union won the race.

As a part of the GRC sock hop, students collected socks to give to soldiers in a sock drive called “Socks for Soldiers: Care, Share, Give a Pair.” The school’s goal was to collect 200 pairs of socks, and as of Feb. 20, the students had collected 209 pairs, McLemore said.

Space archaeologist to speak at University of Montevallo