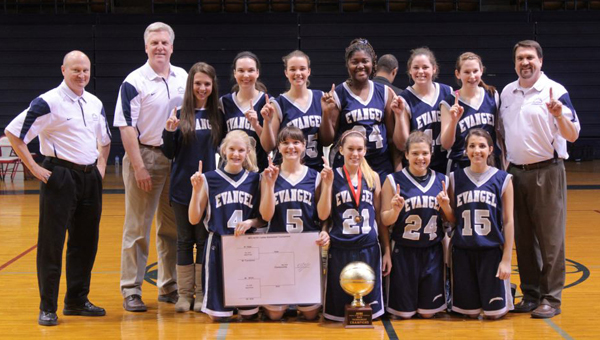 The Lightning trailed 7-1 after the first quarter, but outscored the Eagles 21-5 through the second and third quarters en route to their third ACSC tournament championship in the last four years.

Evangel had advanced to the finals after riding the play of Byers and Bethany Letson to a hard-fought 32-29 win over second-seeded Evangel Family Christian Academy of Montgomery in the semi-finals on Feb. 15. Byers had 13 points, 16 rebounds and six steals, while Letson added 11 points, including 7-of-0 free throws. Kristen Free paced EFCA with nine points.

Byers was named the MVP of the tournament, while Letson joined Christina Jones and Joelle Reed of Hope, Kristen Free of Evangel Family, and Mary Helen Boykin of Tuscaloosa on the all-tournament team.

In regular season conference awards given at the tournament, Byers and Entrekin were named first-team all-ACSC, and Letson was named second -team all-conference.