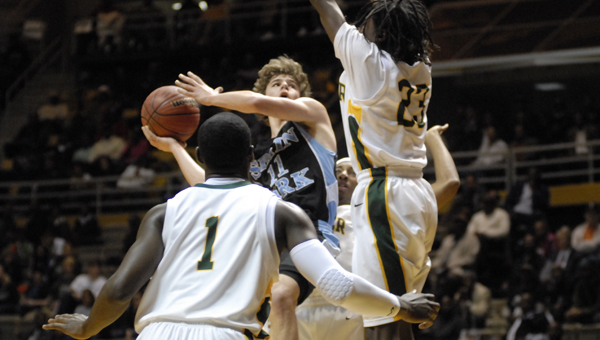 MONTGOMERY – The Spain Park Jaguars’ playoff run ended at the hands of the Carver-Montgomery Wolverines in a 57-29 loss in the Class 6A Central Region semifinals Feb. 20 at Alabama State University.

Despite the loss, Spain Park head coach Neal Barker said that his team ended their season against the best team in the state.

“Our goal every year is to go as far as we can go until we play a team that plays better than us,” said Barker. “We did that and obviously that team is very good.”

Carver-Montgomery was able to win the battle in the paint while out-rebounding Spain Park 26-10 on the Jags’ offensive end of the floor.

“They have a lot of big kids and it was hard for us to match up physically,” Barker said. “We needed to make a lot of shots, but things didn’t quite go our way.”

Spain Park scored the first points of the game, but quickly lost the lead when Carver scored seven unanswered points on its way to a 14-3 first quarter lead.

The Wolverines continued to apply the pressure when they outscored Spain Park 13-8 in the second for a 27-11 halftime lead.

Carver opened the second half on a 17-3 run and held the Jags to 2-of-9 shooting in the third to capture a 50-18 lead heading into the fourth.

Spain Park outscored Carver 11-7 in the fourth to make the final 57-29 score.

“All-in-all I’m proud of our guys,” said Barker. “They battled to get this far and it’s been a good year.”