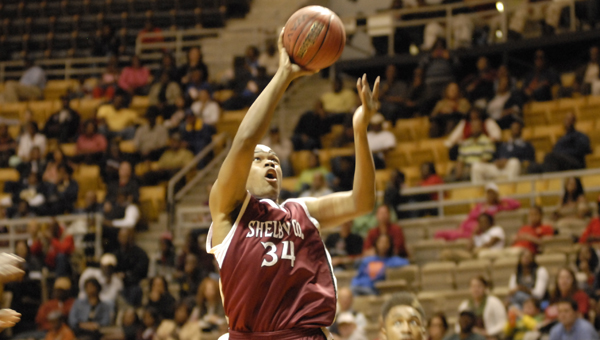 MONTGOMERY – The Shelby County Wildcats put together a late rally, but it wasn’t enough to top the Paul Bryant Stampede in a 52-44 loss in the Class 5A Central Region championship Feb. 21 at Alabama State University.

“They (Paul Bryant) made a lot of shots,” said Shelby County head coach Torry Brown. “I thought our guys continued to fight and play hard.”

The Wildcats led as much as five early in the first quarter and appeared comfortable on the region championship stage – their first trip to the region finals since 2000.

“We knew if we could get the ball inside to Brandon (McKinney) and Emmanuel Hall that they could do some damage,” said Wildcats’ senior forward Tyler Madison.

Paul Bryant forced three straight Shelby County turnovers to end the first on an 8-0 run to take a 12-9 lead.

A pair of 3-pointers from Cedric Youngblood and Justis Martin brought the Wildcats within one, 16-15, two minutes into the second quarter. However, the Stampede answered with an 8-0 run to take a 24-18 halftime lead.

Bryant continued to pull away in the third while capitalizing on Wildcat turnovers when they went on a 9-0 run to take a 33-18 lead midway through the quarter.

The Stampede held Shelby County to a game-low six points in the third to grab a 41-24 lead headed into the fourth.

“Their length gave us some problems,” said Brown. “They really extend out in their matchup-zone and do a good job of it.”

Bryant did something that most teams the Wildcats have faced this season have been unable to do – contain Madison. The Stampede held the Shelby County senior scoreless in the first half with his first basket coming in the third quarter.

“They denied Tyler a lot on the perimeter,” said Brown. “It was one of those nights where we couldn’t get the ball where we wanted to.”

The Wildcats began to chip away at the Bryant lead when they opened the fourth on a 7-0 run to cut the deficit to 10. Shelby County held Bryant to a pair of free throws to cut the score to eight with less than a minute remaining in the game. The Stampede sealed the win at the line, finishing 3-for-6 in the last 58 seconds while allowing a Youngblood 3-pointer for the 52-44 final score.

Madison and McKinney both represented the Wildcats on the Class 5A boys all-region team.