Since 1999, students from Shelby County have joined hundreds of thousands of others from across Alabama and the Southeast in taking a school trip to the American Village in Montevallo. The American Village is a hands-on history and civics education center where students learn about liberty, the founding of our country and the sacrifice of our veterans. When they get to this 183-acre campus they enter Washington Hall, patterned after George Washington’s Mount Vernon home in Virginia. 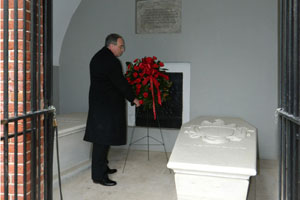 On Feb. 22, the American Village represented those students, teachers, and other visitors at the real Mount Vernon in Virginia on Washington’s 281st birthday when Walker placed a wreath at George Washington’s tomb.

“I think Alabamians can be proud that their own American Village was invited to Mount Vernon for this special ceremony,” Walker wrote in a press release. “George Washington believed that liberty and American self-government would survive and flourish only if young people were prepared for their roles as good citizens and leaders. Our homes, our churches, our communities, youth organizations and special places like the American Village can all help teach them and inspire them to fully appreciate the freedom we enjoy as Americans.”

On a cold, rainy day, the 281st anniversary of Washington’s birth, Walker passed through the iron gates guarding his tomb and placed a wreath of magnolia gathered from the grounds of Washington’s beloved Mount Vernon home. He addressed those present for the ceremony with these words: “With thanksgiving for his life and legacy, and with deep humility, we lay this wreath to honor George Washington, the ‘Father of Our Country’ – may he forever remain ‘first in the hearts of his countrymen.’”

Kindergarteners learn about their pearly whites