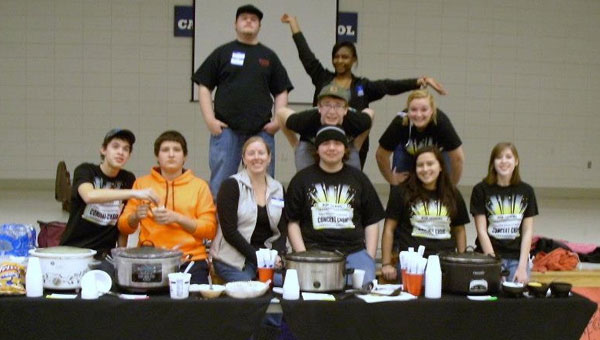 Members of the Calera High School Choir held a chili cook-off to raise funds to travel to New York to sing at Carnegie Hall. (Contributed)

“Debbie and I have always wanted to do a joint concert with our two choirs and she suggested performing at Carnegie Hall,” Lagrone said. “She applied, the organization extended us an invitation to sing and now we are fundraising to get there. The combined choirs total 30 students, Calera is represented with 15. The trip is scheduled the same weekend as Calera’s junior-senior prom, otherwise we would have a greater participation.”

Mark your calendar for the next fundraiser, Calera High Spirit Night, at Bojangles on March 5. The choir will receive 10 percent of food sales from 5-8 p.m.

“I feel this is a once in a lifetime opportunity for these students,” Lagrone said. “They are working very hard to raise the money themselves, but New York and air fare is very expensive. While we are in New York, we will experience a couple of essential attractions, including the Broadway hit musical Newsies.”

One way choir members raise money is by acquiring tax deductible sponsorships that is applied directly to their account. With a sponsorship, 100 percent of the money goes toward the cost of the trip for the student. If you would like to make a general contribution or help sponsor a specific student, contact Lagrone at 682-6100 or email alagrone@shelbyed.k12.al.us.

By MOLLIE BROWN / Community Columnist Once again, it’s time for young ladies to dust off their tiaras and young... read more