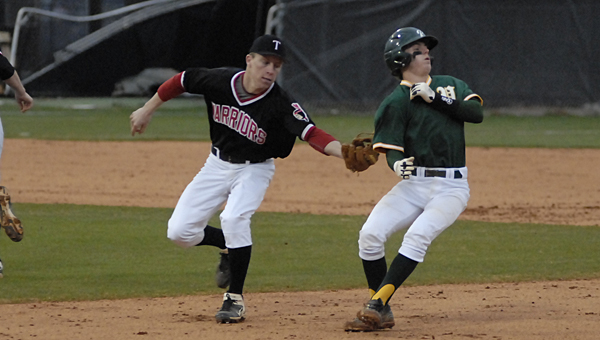 Thompson’s Davis Cox tags out Pelham’s Hunter Stovall in the first game of the Warriors’ doubleheader against the Panthers Feb. 26 at Pelham. (Reporter photo/Mickel Ponthieux)

PELHAM – The Pelham Panthers turned Thompson errors into runs in a 6-5 extra inning win for a doubleheader sweep over the Warriors Feb. 26 in Pelham.

Thompson (6-2) took an early 1-0 lead when Drew Avans led off the game with a single to left and scored on a Pelham wild pitch.

Pelham (4-1) scored three runs in the first inning after a Thompson error extended the inning. Fletcher Johnson led off the bottom of the first with a double and was brought home on a Hunter Stovall single to tie the game 1-1. With two outs, Jackson Pruitt popped the ball up toward the first base side and the Warrior defender was unable to field the ball and allowed Stovall to score from second for a 2-1 Panther lead.

Chase Brashier followed with a double up the middle to bring home Pruitt for a 3-1 lead.

The Panthers added to the lead in the second when Sam Finnerty led off the inning with a single up the middle and scored on an errand throw after a Fletcher Johnson single for a 4-1 Pelham advantage.

Brashier struck for his second double of the game in the third with two outs and came home on a Zach King single for a 5-1 Pelham lead after three innings of play.

Thompson didn’t let the four-run deficit faze them as they evened the score in the top of the fourth. The Warriors quickly loaded the bases after a leadoff single by Houston Davenport, a walk by Mel Harwell and a base hit by Zack Seagle. Brennan Prichard brought home Davenport and Harwell with a single to right to cut the Panthers’ lead to two. Avans picked up his second hit of the game with a 2-RBI triple to tie the game 5-5.

Pelham didn’t allow a Warrior base runner in the top of the eighth and went right to work to end the game. Alex Urban led off the Panther eighth by working a five-pitch walk. A wild pitch and passed ball allowed Urban to reach third forcing the Warriors to load the bases.

Hunter Stovall and Tyler Payne each received free passes on intentional walks to bring up Zach Canant with the bases loaded. Canant put the second pitch he saw into play and the Thompson shortstop was unable to field the ball cleanly, which allowed Urban to score the game-winning run.

Avans led all Thompson hitters with a 3-for-4 performance including a triple and two RBIs. Pritchard added a 1-for-2 effort with two RBIs.

Brashier finished 3-for-3 for Pelham with two doubles and a RBI. Johnson was 2-for-5 with a double and a RBI.

Payne pitched Pelham to the win in four innings in relief. He gave up no runs on two hits with three strikeouts.

Avans took the loss for Thompson pitching two and one-third innings while allowing a run on no hits.

The Panthers began the two-game set with a 6-2 victory over the Warriors.

Canant was 2-for-2 with two doubles and three RBIs to lead Pelham.