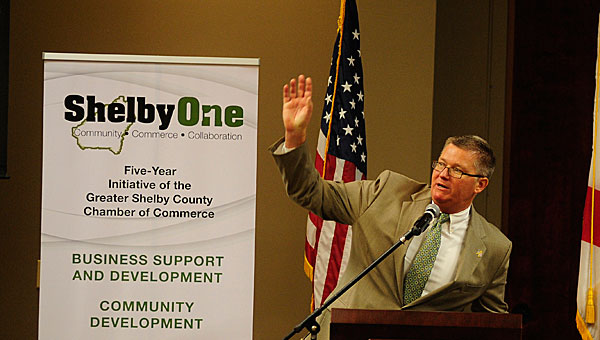 The Greater Shelby Chamber of Commerce has raised 112 percent of its Shelby One campaign fundraising goal, and is looking to use the funds to better the county’s business, quality of life and education climates.

The Chamber held a reception at the Inverness Country Club on Feb. 26 to celebrate the fundraising campaign’s success.

During the reception, Shelby One Campaign Chairman Paul Rodgers and 2013 GSCCC Chairman David Nolen announced the Chamber had raised more than $1.9 million through the campaign, which exceeded the goal of $1.7 million.

Shelby One is the Chamber’s five-year strategic plan, and is aimed at supporting existing small and retail businesses, working with elected officials, business and industry leaders and college and university officials, working with local governments and marketing Shelby County.

Rodgers previously said the Chamber received five-year donation pledges from more than 50 businesses and municipalities to support the campaign.

Mancer said the Chamber will enact a new business plan each year aimed at working toward the Shelby One campaign’s goals.

“There have been a lot of heroes during this campaign,” Mancer said.