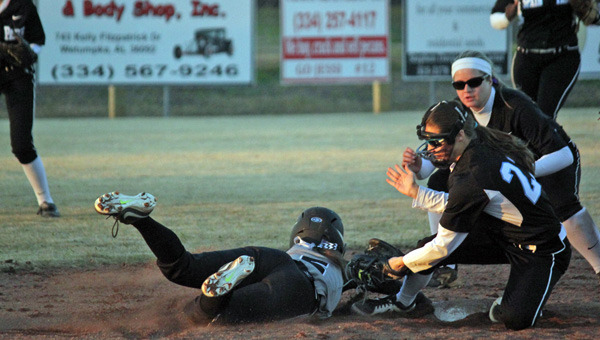 Spain Park’s MaryKatherine Tedder applies the tag to a Wetumpka runner for the third out of the fifth inning. (Contributed/Griffin Pritchard)

By Griffin Pritchard / The Wetumpka Herald

WETUMPKA – The Wetumpka Lady Indians capitalized on a throwing error in the bottom of the seventh to seal a 4-3 victory over the visiting Spain Park Lady Jaguars Feb. 27.

Wetumpka, who used a 13-run rally in the sixth to down Trinity one night prior, jumped ahead 3-0 to start the game.

Spain Park answered with a pair of runs, but trailed 3-2 after four innings of play.

Julianna Cross led off the top of the fifth with a triple and scored on a Brittany Anderson sacrifice bunt to first.

With the game knotted 3-3, Wetumpka threated in the bottom of the fifth when Ashley Dixon reached on a dropped throw from short. With Riley Green entered as the runner and took second on a Sydney Dixon sacrifice. Green, a freshman, over shot the bag and got into a rundown that led to her being tagged by MaryKatherine Tedder sliding back into second, essentially killing Wetumpka’s potential rally.

The 3-3 gridlock turned into a pitcher’s dual between the Tribe’s Lauren Lett and the Lady Jaguars Haleigh Sisson. Both throwers retired the sides in the sixth and Spain Park was forced to play defense in the seventh.

Leadoff batter Destinee Brewer bunted her way onto first to start the final frame and took second on a passed ball.

With one out, Ashley Dixon bounced a liner to the left side of the infield. The throw sailed over a leaping MaryKathryn Bonamy and bounced off the fence. Bonamy and Dixon collided allowing Brewer to round third and sprint home for the Lady Indians’ 4-3 victory.

Both teams will be in action this weekend as Wetumpka is scheduled to face Tuscaloosa County and Pinson Valley in the first day of the Spain Park hosted Jaguar Classic. The Lady Jags are set to face Gardendale and Central-Hayneville.

MONTEVALLO – Sophomore Zack Willoughby drove in junior Will Fulmer with an RBI single to left field to lift the University of Montevallo baseball team... read more