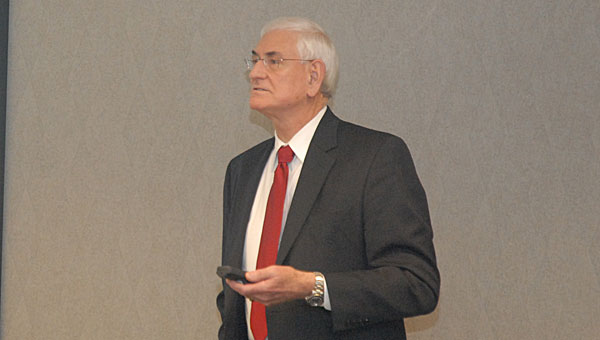 An Alabama trauma care system – the only one of its kind in the country – has helped significantly cut down on the number of traffic accident deaths over the past few years, the Alabama Hospital Association director told the Alabaster-Pelham Rotary Club on Feb. 28.

During the meeting, Hospital Association Director Dr. John Campbell touted the Alabama Trauma System, and said it is the only statewide system of its kind in the United States.

Through the system, a central intranet computer station monitors most of the Alabama trauma centers, and is able to tell which services are available at the centers at any given time.

When emergency medical technicians arrive on a wreck scene, they determine if a patient is suffering life-threatening injuries and requires treatment at a trauma center. The Trauma System is then able to determine where the patient should be transported for treatment.

“Why do we need it? We think it saves lives,” Campbell said of the system.

Alabama’s trauma centers are categorized into three levels. Level one centers are able to handle the most severe cases, and can have a patient in the operating room within 15 minutes of arrival.

Campbell said level two centers can handle “almost any trauma case,” and can have a patient in the operating room within 30 minutes of arrival. Level three centers have the surgical capability to handle less-severe trauma cases, and can stabilize serious patients so they can be transported to higher-level hospitals.

After a serious wreck, patient survival rates increase dramatically if he or she receives treatment within an hour of the wreck, Campbell said.

By NEAL WAGNER / City Editor The Alabaster Board of Education voted during its Feb. 28 meeting to enter into a... read more