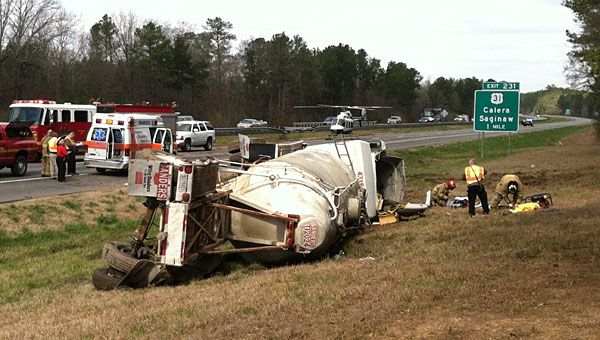 First responders work to clear an overturned 18-wheeler on I-65 in Calera on Feb. 28. (Contributed)

Alabama State Troopers were forced to close the northbound lanes of Interstate 65 in Calera on Feb. 28 after an 18-wheeler overturned just north of the 230 mile marker.

The interstate was reopened about 12:20 p.m., according to Calera Fire Chief Sean Kendrick.

“The 18-wheeler came across the interstate from the other side, past the guard rail and almost into the woods,” Kendrick said.

The driver was “banged up,” and lifted by Lifesaver to UAB Hospital, Kendrick said.

Christine Boatwright contributed to this report.