CHELSEA – The Chelsea Citizens Observer Patrol was honored for more than 4,000 hours of volunteer patrol hours in 2012 during the annual COP awards dinner Feb. 26.

The dinner, which was held at Liberty Baptist Church, was attended by about 30 COP members and their spouses, as well as Shelby County Sheriff Chris Curry, Mayor Earl Niven, Fire Chief Wayne Shirley and City Council members. 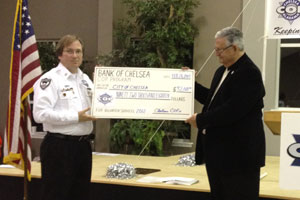 Birmingham Police Chief A.C. Roper spoke on the spirit of volunteering in America, according to COP member Dale Neuendorf.

“He emphasized that the solution to many of the problems in our cities is for the citizens to get involved and take an active part by watching out for each other,” Neuendorf wrote in an email. “He pointed out that the police can’t be on every street corner, but that neighbors and citizens are on every street corner and should call the police any time they see anything suspicious.”

In addition to perfect attendance, hours of patrol time and number of incidents reported, the following COP members were given the following awards:

-Jim Powers, one new recruit in the program.

-John Devenyns, two reports that led to an arrest.

-Robert Burnett, two reports that led to an arrest.

-Matt Mellen, one report that led to an arrest.

-Robert Burnett, volunteer of the year.

Patricia Hipps received the special recognition “Golden Crutch” award for a broken leg received while on search patrol looking for a lost individual.

The COPs presented a $92,018 check to Niven for the 4,023 volunteer hours. The amount represented the equivalent value of the COP volunteers to the city.

The Chelsea COP Program is comprised of about 30 active volunteers who are the “eyes and ears” for the City of Chelsea. They patrol in three patrol cars and are in constant contact with the Shelby County Sheriff’s Department to provide any law enforcement needed in Chelsea. The COPs observe and report any suspicious activity but do not engage or confront.

The COPS provide assistance at many Chelsea events throughout the year. All uniforms and equipment are provided by the City of Chelsea, and they are always looking for good, new members. Anyone interested can contact the COPs at cop@cityofchelsea.com or by calling Chelsea City Hall at 678-8455.

FROM STAFF REPORTS MONTEVALLO – The seventh annual Montevallo Art Show will be in Orr Park April 13 from 10... read more