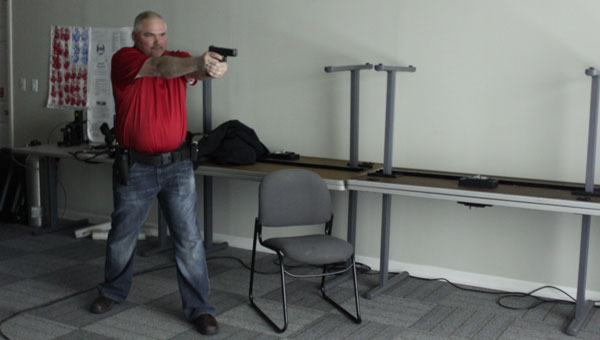 CALERA – The Calera mayor and City Council brandished air-powered pistols and barked police commands as part of a shooting simulation at the Calera Police Department Feb. 26.

Calera Police Chief Sean Lemley offered the simulation to Calera’s leaders to show them how the city’s police officers train and gain experience.

“I wanted them to get the experience of how quickly things can go bad for us,” Lemley said. “I also want to let them know that we have an outstanding police force that is well trained.”

Mayor Jon Graham and City councilmen Bobby Joe Phillips, Philip Busby, Chris Bunn and Alan Watts took turns commanding the simulated threatening people to put their guns down, put their hands in the air or get on the ground. 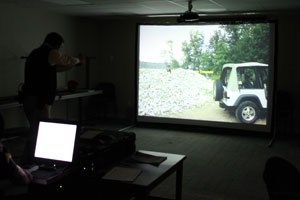 “We’re trained to shoot until there’s no longer a threat,” Lemley said. “In our training, we never die. How you train is how you fight. When you’re under that much stress, you rely on your training.”

The simulation equipment belongs to the Alabama Municipal Insurance Company, of which the Calera Police Department is a member. Officers can gain credit hours toward further certifications by training with the program.

After training with the AMIC program, Calera officers conduct Simunition training. During Simunition training, officers wear body protection and shoot small, plastic bullets loaded with a marking agent, which is “like a small paintball, but more wicked,” Lemley said.