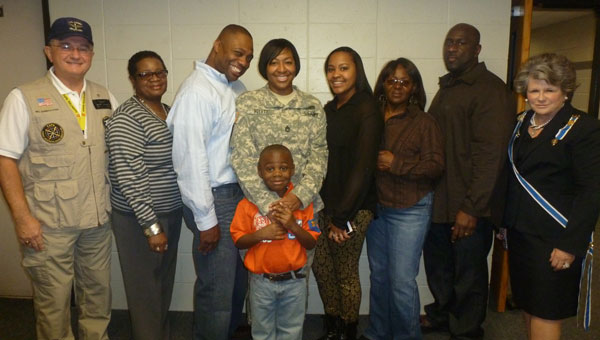 The auditorium was filled to capacity — standing room only — when 240 soldiers of the 135th Sustainment Command (Expeditionary) Alabama Army National Guard stood at attention on the stage at Homewood High School.

Family and friends cheered during the emotional departure ceremony as the unit was called to active duty to Kuwait in support of Operation Enduring Freedom.

“These ‘citizen soldiers’ are American patriots, who band together and leave family and livelihoods when they get the call to do their duty,” said MG Perry Smith, The Adjutant General, Alabama. “These soldiers are the continuing link of the militia formed in 1636, the date of the first muster in Massachusetts. In 1903 the militia became the National Guard.”

Blue Star Salute Foundation, Inc. (BSSFI) President and veteran Mel Shinholster thanked the soldiers for their service. Shinholster said when he left for Vietnam, there was no deployment ceremony and definitely no welcome home. One of the BBSFI goals is that no soldier ever be shown disrespect again. BBSFI gave a Blue Star Banner to each soldier for their families to display, a tradition begun in WWI, abandoned in Korea and Vietnam Wars, and reintroduced in 2005 by the BBSFI.

Daughters of the American Revolution Alabama Regent Connie Grund and other Daughters gave gift bags to the soldiers’ children and signed up names for a prayer chain.

Sgt. First Class Marilyn Hoyett (Alabaster) has been in the Army for 21 years, and this is her second deployment, the first in 2009 to Afghanistan. She leaves her husband Reginald also in the Army National Guard and their three children: Rylan (kindergarten, Valley); Ciare (10th, Thompson); and Cameron (junior, Samford). Hoyett is a human resource manager.

“My family depends on my service.” said Hoyett. “I make sure I am doing my part.”

This is the second deployment for the 135th, the only headquarters led by a general officer from Alabama to be deployed in the current war. The Alabama National Guard, one of the top contributors in the nation’s National Guard Organization, has called more than 18,000 personal to active duty since 9/11.