Cornerstone’s Coach Smith is a winner

Coach Tim Smith is athletic director of Cornerstone Christain School — its only director and heart and soul of a program that has won 10 state championships.

Smith was recently chosen AISA Coach of the Year. But Smith will readily say he has not built Cornerstone’s program, God has. To Him, Smith gives all the glory. 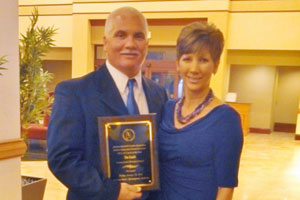 Smith grew up in Columbiana. The “shocker” baby born to Jack and Venida Smith late in life, Smith grew up attending Columbiana schools and playing sports all his life. He credits his Little League coaches Frank Owen, Frosty Shaw and Shelby County High School baseball coach Bill Reed with his success at coaching.

“Sports taught me a work ethic,” said Smith. “If you work hard, good things can happen to you.”

Smith married his high school sweetheart Angie Moore in 1985 and had two children, Heath and Aubri. Smith worked several jobs. However the desire of his heart was to be a coach. Angie began to pray for that desire to become reality. Smith was volunteering as a coach when in 1997 Cornerstone Baptist Church started a school.

Pastor Allen Dennis asked Smith to help coach. Smith would work all day and coach evenings and weekends. In 1999, he was hired as athletic director with no gym, no playing or practice fields, no uniforms, no equipment — nothing.

The rest of the story is a miracle in action as God built an athletic program with the help, money and sweat of the congregation that laid eight truckloads of sod, poured and built a gym and furnished an athletic program that has won in AISA Division IA 10 state championships: 2005 boys varsity basketball; 2007-2012 girls softball; 2010 track and 2012 boys basketball, baseball and girls softball. Cornerstone was state runner up four times: 2005 boys baseball; 2007 football; 2009 girls basketball and 2010 boys baseball.

“God has been in control,” said Smith. “I am not smart enough. I am just thankful. He has just let me come along for the ride.”