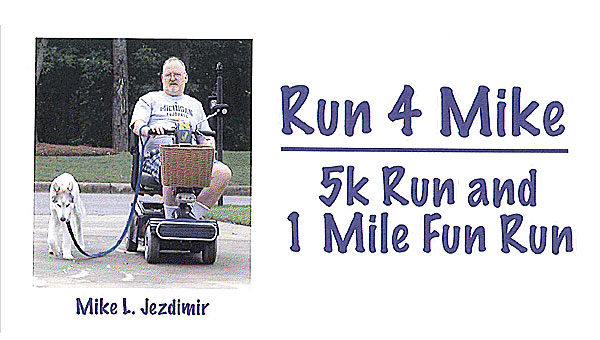 The Run 4 Mike race and fun run will be held on April 13 at Alabaster’s Veterans Park. (Contributed)

On April 13, an Alabaster man who has been battling a spinal cord disease since he was 17 will give locals a chance to be active while raising money to help others affected by the disease.

The first Run 4 Mike will begin at 7:30 a.m. at Alabaster’s Veterans Park on Alabama 119, and will raise money and support for those affected by spinal cord diseases such as transverse myelitis and multiple sclerosis.

Run 4 Mike was organized by the Mike L. Jezdimir Transverse Myelitis Foundation, which was founded by Jezdimir. Jezdimir, who now has grandchildren, has been affected by transverse myelitis for decades.

“The run has three purposes: To raise awareness and funds for spinal cord disease research, to promote Alabaster and to promote kids and adults coming out to exercise,” Jezdimir said during a recent Alabaster City Council meeting. “We are just going to have a good time out there.”

The last day to register for the event is Thursday, April 11.