Profile: Field of Angels – Creating an even playing field 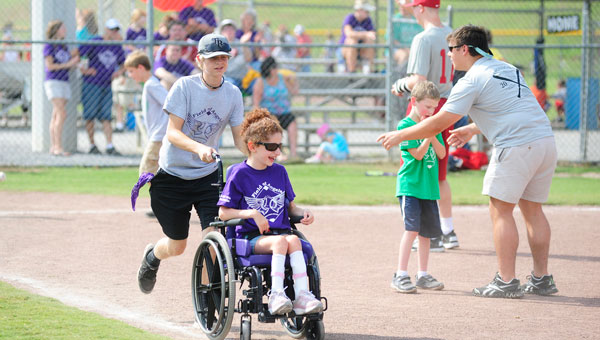 Ellie Meeks hurries to first base with the help of her buddy, Wesley Posey. (Reporter photo/Jon Goering)

A cheer from the crowd rose to a peak as Rick Karle, sports director at Fox 6 News, used his best announcer voice to holler each child’s name into the microphone in late August.

The baseball field, full of kids sporting their teams’ colors of orange, green, purple, red, blue and yellow, responded with enthusiasm as their parents and fans yelled from the stands during the opening ceremonies.

The all-American scene is a familiar one for families across the country, but the league that plays at Oliver Park in Calera for a month-and-a-half each fall has a special purpose. The kids who pick up the bats and run the bases didn’t have the opportunity to play America’s favorite pastime three years ago. Field of Angels, however, gives them a chance to have a sport all their own.

Field of Angels, a special-needs baseball league, began with a former college baseball player wanting to share his love of the game with his firstborn son. 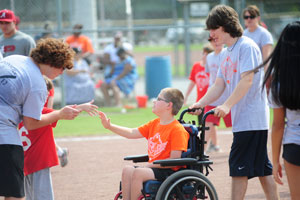 When Chris Bunn found out his wife was pregnant with a boy, he was ecstatic.

“When he was born, I was excited to have a baseball player,” said Chris, who played at Jefferson State Community College.

“When I learned he’d never be able to play, it gets you down,” Chris said.

The idea for a special-needs baseball league grew in Chris’ mind for years before the idea came to fruition.

“The good Lord laid it on my heart to form a league so kids like him could play baseball,” Chris said.

Chris said he internally wrestled with the idea until, on a plane ride from Texas in mid-2008, he began writing “every single vision I had for the Field of Angels,” and met with the league’s future board members.

“We decided to start from scratch,” Chris said, and within a year, the league was an incorporated 501 (c)3 nonprofit with bylaws.

In 2010, the first year of Field of Angels, 36 players were on four teams. The next year, the league grew to 58 players, and 62 kids donned the colorful team shirts of the league’s six teams in 2012.