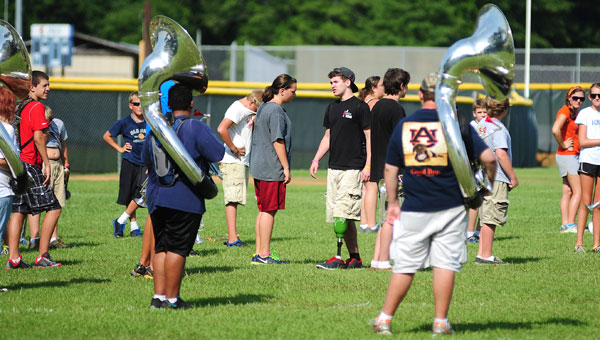 When Angel Goodwin drove down the hill on Shelby County 55 the morning of Feb. 29, 2012, she immediately knew she could be witnessing the last moments of her son’s life.

The accident was still fresh — it was only a few minutes before that she had gotten the phone call from the police, letting her know Chris, then 17, had been in a “horrific” wreck. He had hit a slick spot in the road and skidded off, crashing directly into a tree. The damage pinned Chris in the vehicle and cut off all blood flow to his legs.

“I knew for the police department to call and use the word ‘horrific,’ I knew it was a bad accident. But I had no idea how bad,” Angel said in an August 2012 interview, months after the accident. “Chris saw me and he said, ‘Mama, all we can do is pray.’”

Chris was still stuck in the vehicle, and the Fourmile Volunteer Fire Department — the first rescue personnel on the scene — did not have the extrication equipment needed to get him out. They called for help. Meanwhile, Chris and Angel sang “Jesus Loves Me” and prayed for God’s help.

Because of the way the vehicle had been damaged, rescuers finally had to call two wreckers to put chains on the truck and pull it apart before Chris could be freed.

Chris’ father, Keith, stayed with his wife and son during the extraction, assisting rescuers by holding the IV bags medics were using for Chris.

Once Chris was out of the vehicle, medics realized that the lack of blood flow to his legs was actually a gift from God.

“Now we know that was a blessing, because he would have bled to death (otherwise),” Angel said.

An ambulance took Chris and Angel directly to the trauma unit at UAB Hospital. The scene when they arrived was straight out of the TV show “ER,” as medical personnel rushed Chris to be prepped for surgery.

Yet, through the chaos, Angel felt a serenity.

“There was a peace that God had given me, because I knew he was going to make it,” she said.

THE NEXT THREE DAYS

While Chris certainly did make it, the next three days were a dangerous time.

The initial X-ray taken on Wednesday, Feb. 29 — the day of the accident — revealed that both of Chris’ legs were broken in multiple places. The left leg in particular was horribly shattered — “like pieces of peppermints or pretzels,” Angel said.

As Chris was taken into surgery after the accident, the possibility of amputating his left leg hung in the air.

Angel turned to Keith and asked, “How are we going to tell our 17-year-old son we made the decision to amputate his leg, if we need to amputate?” Keith simply replied, “We’ve got to give it to God.”

God’s decision came soon. A specialist came to speak to them to let them know amputation of the left leg below the knee — which doctors referred to as a “crown amputation” — was necessary.

“He said, ‘I’ve never seen anything like this. How he didn’t bleed to death, I don’t know,’” Angel said.

The next day, Chris again had to be rushed into surgery to save his right leg after developing compartment syndrome, which involves increased pressure in a muscle compartment, in that leg.

The Goodwins’ greatest challenge came on Friday, however. That day, Chris developed a fatty embolism, a blood clot capable of flowing into his lungs. Angel said doctors told her most patients do not survive developing a fatty embolism. His doctors had to do another life-saving procedure.

However, true to his nature, Chris survived. His body needed time to recover, though, and because of his extreme pain, Chris was in a medically induced coma for 25 days after his Feb. 29 surgery.

While he was asleep, he was still changing lives. Angel heard from a classmate of Chris’ at Shelby County High School, who told her that students at the school were praying together and accepting Jesus because of Chris.

“God was using Christopher — and he was silent — to change lives,” Angel said. “We knew it was worth it.”

TAKING THE NEXT STEP

Chris woke up on March 24 without his left leg below the knee and without the ability to talk, due to the tracheal tube down his throat. Nails had been placed in the bones of both legs to help straighten his legs and hold his bones together.

He had been through a harrowing journey that involved near death. But he was awake, and that was enough for Keith and Angel. Before they could begin to move on, though, they had to share a hard truth.

“We told him they were not able to save his leg, but God was going to give him a new leg,” Angel said.

Keith also had a message for his son — but this one was a message of hope.

“Keith said, ‘Chris, you have been marked for Christ. Son, you have three nails and a crown, and the third day after the accident, God brought you back,’” Angel said.

From then on, the family looked to the future. Chris quickly moved from the hospital to a rehab facility and was able to go home after 45 days. Life changed totally — Chris wasn’t able to get into the family home in his wheelchair, so friends and family helped to build a wheelchair ramp and widen the doorways.

“God provided so we could come home to our home,” Angel said. “My thing is, normal is nothing but a setting on a washing machine. This was a new normal.”

At every turn, Chris confounded expectations.

Chris said the recovery itself wasn’t as difficult as it could have been, especially once he decided that moving forward was preferable to looking back.

“I wasn’t really ever worried or scared or anything,” he said. “That’s just how (life) works. I’m not going to sit around and whine about anything.”

Now, Chris is 18 and has adjusted to his new life, which in many ways is remarkably similar to his old life. He’s driving, and with the help of a special prosthetic made for the water, he can hunt, fish, swim and take a shower standing up. He also plays basketball, albeit in a wheelchair.

He said life is just life — nothing more and nothing less.

“(Life) is almost the same as it would have been,” he said. “It’s just a minor setback. There’s nothing I won’t be able to do.”

And, in fact, there may be more he’s able to do now.

ROLLING INTO THE FUTURE

During Chris’ recovery, he started playing in pickup wheelchair basketball games at the Lakeshore Foundation in Birmingham. His athleticism and talent wowed the regulars there, especially after they realized how recently he’d been hurt.

“They were amazed that his accident was so recent and he was doing this stuff,” Angel said.

When Chris was there one night, the conversation turned to his college plans. He said he’d likely be going to Jacksonville State University or perhaps another college closer to home, but his love for the University of Alabama was well-known, and his friends said he should consider going to Alabama to play wheelchair basketball.

One man Chris played with actually knew Miles Thompson, the wheelchair basketball coach at Alabama, and — at 8:45 at night — pulled out his phone and proceeded to call Coach Thompson.

The Goodwins chatted with Thompson and decided to set up a wheelchair basketball scrimmage for that weekend at the Lakeshore Foundation in order for Thompson to meet Chris.

“I would have been intimidated, but he was not. He just wheeled out onto the floor,” Angel said.

After the scrimmage, Thompson was sold.

“Miles said, ‘He can play basketball. Is this something y’all are interested in?’” Angel said. “We said, ‘Yes sir!’”

Chris enrolled at Alabama in January. He gets 100 percent of his tuition and room and board through vocational rehabilitation.

Chris said he’s not surprised that great blessings have come out of a horrific situation.

“It’s just how it works. It happened for a reason,” he said. “I guess it’s almost what I deserve — my reward from God.”

Chris said he can now impact people’s lives with his story.

“It just opens the door to more people for me to try to help. It’s a great opportunity,” he said. “Somebody that’s been there, that knows, can make even more of a difference.”

Angel is convinced that Chris was designed to meet this challenge, that God has been preparing her son from the beginning. Chris was born three months premature — from his first moments on earth, he’s been a survivor.

The night before the accident, Chris tweeted a short message — only three words. “Challenge accepted. #sogonnaWIN” Even he doesn’t know why he sent that message out into the world.

“I don’t even know. It was nothing important,” he said. “Me and my friends are always saying stuff like that. It wasn’t important, but now it’s important.”

Angel has a different view.

“Nobody knew what that meant, but God knew. God was preparing him,” she said. “We’ve always known God has a plan for him. He shouldn’t have been here to begin with. To survive what he’s survived, you look at him and know without a shadow of a doubt that there is a God.”