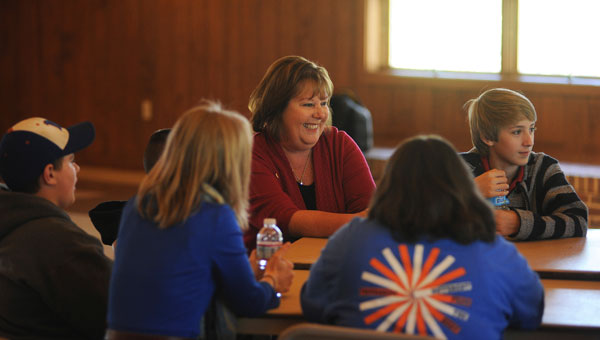 Carol Bruser chats with students from Montevallo Middle School during the Students’ Civic Institute, sponsored by the David Mathews Center for Civic Life, on Nov. 15 at the University of Montevallo. (Reporter photo/Jon Goering)

Even when Carol Bruser is wearing all black, she’s the most colorful person in the room.

Just ask, and Carol, the Leadership Shelby County coordinator, will tell you all about how she conquered her fears when she went through the leadership program herself in 2000-2001.

“I went through not knowing anything about the program,” said Carol, who said she was terrified of doing some exercises, such as the trust fall, when she would need to trust her fellow participants to catch her. “I practiced for weeks at home falling off my bed onto (my husband).”

However, it wasn’t long before Carol fell in love with Leadership Shelby County.

“After you do this program, you can go anywhere in Shelby County, to any event, any party, and you’ll know five people there,” she said. “You won’t find another Leadership program like this anywhere.”

Leadership Shelby County, which is based at the University of Montevallo, is an annual program that offers participants a chance to become leaders for Shelby County through participating in full-day sessions on high-priority topics in Shelby County, such as education, economic development or the justice system. The program’s mission is to enhance the quality of life in Shelby County.

Carol’s title — “coordinator” — doesn’t divulge how devoted she is to the program, however.

“Everything I do involves Leadership Shelby County in some way,” Carol said.

In a way, it was inevitable that Carol would have this job. No matter where life has taken her, she’s always been a leader, as Leadership Shelby County President David Bobo said.

“It is very fitting that Carol is the leader of a leadership program. She is like the athlete who, by her involvement makes the entire team better,” Bobo said. “She ensures that credit for the successes is spread as widely as possible throughout the group. She is a fantastic leader.”

HER PATH TO LEADERSHIP

She stayed in the area, moving to Pelham 36 years ago, after she married her husband, Buddy.

“We moved to Pelham, which was teeny-tiny. We didn’t even have the interstate,” Carol said. “I’ve seen Pelham grow tremendously.”

She stayed home with her three children until they were grown. Carol and Buddy have five grandchildren, who all live in the area.

“I go home on the weekends and from Friday night to Sunday, we just have a house of children all weekend long. We have a swimming pool, so we swim and we eat,” said Carol, laughing. “We’re very fortunate because we are all very close. Our children must really like us, because they hang out with us a lot.”

When Carol was bringing up her children, she worked with several different organizations — she was on the Women’s Committee of 50, was the president of the Charity League and was PTO president at all of the schools her children attended.

“I didn’t do it for any other reason than to make a difference in my children’s schools,” Carol said. “When I was a stay-at-home mom, I worked harder than I do now.”

In 2000, the coordinator for the Education Foundation stepped down. Carol, already a member of the foundation’s board, stepped in as the interim coordinator — and remained in the role for eight years.

In fact, when Carol went through Leadership Shelby County, her class was broken up into three groups, each of which had to come up with a project that would improve the quality of life in Shelby County. Her project group decided to focus on the Greater Shelby County Education Foundation and how to keep it growing.

“It was near to my heart, and it meant a lot to me that (my group members) bought in,” Carol said.

Eventually, Corbett decided to retire, and Carol applied for the job. For a couple of years, Carol was both the Education Foundation coordinator and the Leadership Shelby County coordinator.

In 2008, Carol knew it was time for a change. Leading both programs was too much, and she had to make a choice. She chose Leadership Shelby County.

Carol wears many hats in her role at the University of Montevallo.

Besides her work with Leadership Shelby County, she works with the Career Development Center to help Montevallo students find internships and to help employees post job openings.

She loves everything she does for the university, but it’s apparent that Leadership is her passion. And it’s no surprise — the program helped her get through one of the toughest times of her life.

In summer 2009, Carol kept feeling a sharp pain at the bottom of her breast. People kept telling her, whatever it was, it couldn’t be cancer because cancer is typically pain-free.

She went in for a check-up in July 2009 and had a cyst removed. Her doctor told her it likely wasn’t cancer. When she went back to get the test results, the doctor was just as shocked as she was about the results: Stage 2 breast cancer.

“That was a horrible experience, but it was a wonderful experience. Everybody just stepped in,” Carol said. “The best feeling in the world is knowing you can get sick and nothing skips a beat. You start noticing how well-prepared the ones you love are to continue on and use what you’ve given them.” However, Carol’s treatment left her frustrated. She had to take two drugs to help fight the cancer, in addition to chemotherapy and radiation.

“I used to take the drugs they gave me for all that mess, and I used to read about them, and it would say, ‘This drug caused cancer in a lab rat,’” Carol said. “And I would say, ‘Well, thank God I’m not a lab rat!”

The woman so used to taking care of everyone had the tables turned.

“I didn’t have time to be sick. I’m a caregiver, not a care-taker,” Carol said. “I was naïve because I didn’t know anything about it because nobody in my life had gone through it.”

Her experience with cancer did strengthen her spirituality, however.

“For the first time in my life, I felt the power of prayer. I felt people praying for me,” she said.

Carol chose to do a lumpectomy, a surgery in which only the tumor and some surrounding tissue is removed, rather than a double mastectomy.

She has had no traces of cancer since 2010, but is rechecked every three months to be sure there are no more signs of the disease.

Others involved in Leadership Shelby County — such as Shelby County Probate Judge Jim Fuhrmeister — saw Carol as a beacon of strength during that time, even if Carol herself didn’t feel that way.

“During my year as a class member, Carol was struggling with cancer treatment. Because of this, she was not able to take care of the details like she normally does and could not attend all class days,” Fuhrmeister said. “She was going through a very tough time, yet on the days she could be with us, she always had a smile and a positive, even cheerful attitude. Leaders inspire others through their attitudes, and Carol inspired our class.”

NO STOPPING HER NOW

Carol said she loves Leadership in large part because of the people she meets through the program.

She said Leadership Shelby County is continuing to flourish, as the program’s leaders yearly receive large pools of applicants from which to choose 35 class members.

“I feel success in the fact the program is successful. I couldn’t imagine doing this job if we had to go find people,” she said. “We have new leaders coming into the county constantly, so our thing is just identifying who we want to ask.”

Carol said she and Bobo recently went to a Leadership Alabama meeting, where they shared best practices among the state’s community leadership program.

“Other programs were talking about their new ideas and practices, and David and I just looked at each other and said, ‘We’ve done that,’” Carol said.

Bobo said Carol is a major reason for the program’s position above the pack.

Leadership Shelby County board member Donna Francavilla agreed, saying she enjoys time with Carol as much as she admires her.

“Carol brings us donuts and coffee at every meeting,” Francavilla said. “How can you not love a woman who looks after you with such care?”

Carol cares just as much about Youth Leadership Shelby County, which is steadily growing. The youth program accepts 40 class members per year, and routinely gets twice that number in applicants.

“The youth program is awesome. They’re so much more expressive,” said Carol, who said, unlike adults, the youth always let her know exactly how they feel. “They have the biggest hearts. They all want to do something. They blow my mind. I didn’t think like that in high school. If someone had told me to go feed the hungry, I would have said, ‘I’m hungry.’”

Carol said retirement is the furthest thing from her mind.

“I don’t even think about retirement. I enjoy this too much. My three children are doing wonderful. They’re living their lives,” she said. “Working at UM keeps me young, keeps me grounded. I’ve got my family. I’ve got it all together — why would I stop?”

Profile: Working on the water

Joe Ray prepares to take kids out on the water while working with Adaptive Aquatics. (File photo) By AMY JONES... read more