Profile: Working on the water 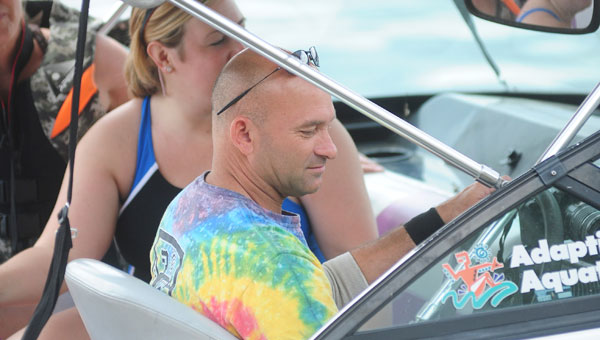 Joe Ray prepares to take kids out on the water while working with Adaptive Aquatics. (File photo)

As Joe Ray wheeled around, showing off the property at Adaptive Aquatics in Wilsonville, he paused for a moment and looked out over the glittering expanse of Lay Lake.

“This is my office,” he said, arm stretched toward the lake. “People are blown away when they come out here.”

Thirty years ago, Joe couldn’t have anticipated how a twist of fate would direct him to Wilsonville and Adaptive Aquatics. Four years after losing the use of his legs at age 20 in a car accident in 1978, Joe attended a session at Camp ASCCA, Alabama’s Special Camp for Children and Adults. Phil Martin, the founder of Adaptive Aquatics, was at the camp and altered Joe’s life forever by teaching him how to ski.

“It was really in the late ‘70s and early ‘80s that adaptive skiing really came about,” Joe said. “At first, I was like, ‘I can’t do this. I’m in a wheelchair. I can’t swim.’ That’s the same argument I hear from people who come out here now, so it’s kind of funny.”

Before Joe took up adaptive skiing, he had never really been an active person, but his first experience on the water changed everything.

“You leave your wheelchair on the dock. You’re out there gliding across the water, doing what you want to do,” Joe said. That made me realize I’m not bound to a set of wheels. It kind of frees you from the confines of everyday life.”

“There’s always some opportunity for anything. People can experience the freedom of the water,” Joe said on why he’s loved Adaptive Aquatics since the beginning. “We say they leave their wheels on the dock. It just kind of opens up the door to all kinds of opportunities.”

In the early 1990s, Phil chose to leave Wilsonville and move back to his native state of Georgia, taking Adaptive Aquatics with him. Joe ran his own adaptive program, which was very similar to Adaptive Aquatics, for about five years until Phil got back in touch with some shocking news: his own diagnosis of multiple sclerosis. Phil would no longer be able to handle operating Adaptive Aquatics, so Joe took the program over, moving it back to Wilsonville.

“I went from a guy in a wheelchair to a camper, to a skier, to an instructor, to the director of a nonprofit,” Joe recalled. “What we do is about changing your perspective of what you can do.”

ADAPTING FOR TODAY AND THE FUTURE

Today, the Adaptive Aquatics property in Wilsonville includes boats, jet skis, a kayaking area, a main dock, a pavilion, adaptive equipment and a building to hold the equipment with restrooms custom-made for people in wheelchairs.

It took 10 years for Joe to raise enough money to get the property into the condition it is now, and he did it a little at a time. Adaptive Aquatics is totally funded through private donors such as churches, civic groups and private individuals, which meant Joe needed to get really good at public speaking really fast.

“It was a lot of angels. It was going out and talking to anybody that would listen to me,” Joe said.

Joe himself is one of those angels. Adaptive Aquatics does not charge the people who use the program, and it’s totally volunteer-based.

Even Joe, who has dedicated his life to the program, does not take a salary. He retired from Blue Cross Blue Shield in 2009, and lives off his disability benefits.

“You just learn how to live simple,” he said. “When you see a 5-year-old kid that’s disabled ski, that’s worth more than any amount in the world.”

Joe knows how important his work is, and he’s working to make sure it can be continued after he moves on. He said he sees himself working with Adaptive Aquatics for at least another 10-15 years, and currently has two assistant executive directors he’s training.

“Once you create something, you have to kind of look to the future, and decide what the long-term sustainability of this organization can be,” he said. “I’ve tried very hard to build this organization so that it can continue on when I’m not around.”

Children as young as 3 and adults as old as 86 have participated in Adaptive Aquatics, and Joe serves people that are developmentally and physically disabled, as well as children with special needs.

Joe sees that skiing helps these people build confidence, which leads to them figuring out how to live life on their own terms.

“It’s an opportunity to see what’s inside yourself. Sometimes they are surprised and amazed they can do that,” Joe said.

Joe said he’s worked with military veterans as well, including a man named Alonzo, who was a survivor of the 2009 Fort Hood, Texas, shooting that killed 13 people. Alonzo was shot in the head and suffered brain injuries, but eventually became an advocate for the disabled.

Joe gained a greater understanding of how important Adaptive Aquatics can be for military veterans when Alonzo told him, “You don’t realize it, but a lot of times, this saves these guys’ lives. Because they’re searching for something.”

Joe also serves those who are able — the family members who are there to help and support. Those families witness their loved ones conquering a new experience, and they become even more confident.

Alabaster resident Nancy Owen, whose son, Connor, is 17 and severely autistic, said the opportunity to ski has changed Connor’s life.

Nancy, Connor and his sister Sarah, 14, recently spent a Saturday enjoying the lake. Connor zoomed behind Joe’s boat on skis, smiling wide. Earlier that day, however, it looked like the fun would have to be postponed when a storm blew through.

Nancy said Joe shows a true love of what he’s doing at all times.

“Joe is one of the most kind-hearted people. He is so willing to be with the kids and adults,” she said. “When you ride with him, you can just feel the passion he has for this program.”

Joe is constantly finding ways to provide happy memories. He has a small waterproof video camera that he mounts on the adaptive skis so he can share video memories with families.

Calera residents Howard and Vicki Hendrix were on Lay Lake the same Saturday with their daughter, Shelby, who is also autistic and nonverbal.

Howard said Shelby loves the water and loves anything fast, such as roller coasters, horses and skiing. The family spent some time in Colorado, and within months, Shelby was an intermediate-level skier.

“She just loves to go fast. She doesn’t have a lot of fear,” Howard said.

“It’s a wonderful opportunity that Joe’s giving these kids. A lot of them have never experienced water,” she said. “And it’s an inspiration what he’s done too.”

“Who would have thought, learning how to ski, that I would be a world champion?” Joe said.

Joe mentors young skiers who want to take it from a hobby to something more, giving them chances to follow in his wake. He knows from experience how the freedom of the water can change a life’s path — especially for the disabled.

“If they want to do something bad enough, they’ll figure out a way to do it. They learn how to adapt,” he said. “Sometimes that gives them their ‘ah-ha’ moment. Sometimes that’s a turning point.”

Phelps continues a life of service

By CHRISTINE BOATWRIGHT / Staff Writer WILSONVILLE – Frances “Skeet” Phelps has spent her life serving others in many different... read more