Rehabilitated hawk takes to the skies at OMES 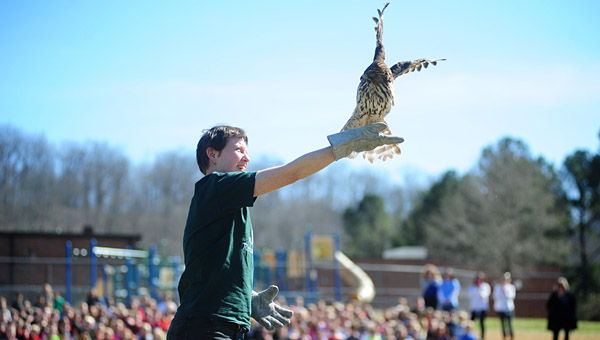 INDIAN SPRINGS – Hundreds of Oak Mountain Elementary students gasped as Holly Whitmire released a red-shouldered hawk into the wild at the school March 8.

“I walked by and noticed it was just hopping and couldn’t fly away,” Smith said. “I kept walking by to see if it was OK, but it wasn’t. It was trying to get up, but it couldn’t.”

The school’s courtyard has high walls and no exit for an injured bird unless it could fly, Smith said.

“They call us because we have the big gloves,” Whitmire said, laughing. “He kept hiding under a juniper (tree). With their help, I was able to capture him and take him back to the center.”

The hawk seemed to have head trauma, but no broken bones, said Director of Education and Outreach at Alabama Wildlife Center Jay Eubanks.

“It was the best-case scenario when it comes to rehab,” Eubanks said. “We basically fed it and got it back to its body weight.”

After two months of rehabilitation, Whitmire and Eubanks carried the hawk in a cardboard box to the field behind OMES March 8.

“You know how it feels when you get sick and your mom gives you chicken noodle soup to make you feel better? That’s what they did for the hawk,” Horton told the hushed students.

As Whitmire released the hawk, the bird flew high and landed in a tall pine tree as the students gasped, pointed and then started applauding.

“We kept in touch (with the Alabama Wildlife Center) because I wanted to make sure it was OK,” Smiths said, “and he is.”

By AMY JONES / Associate Editor HOOVER — Spain Park Theatre will put on a special performance of a prize-winning... read more