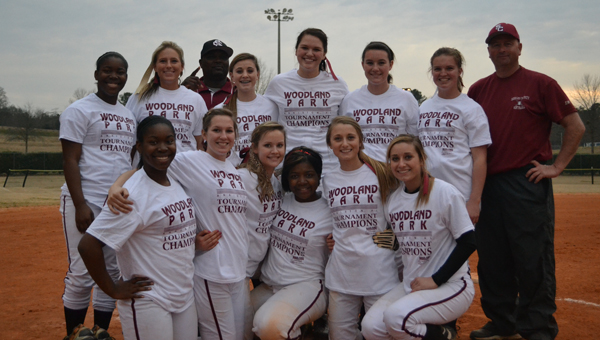 The Shelby County Ladycats swept through the Anniston tournament March 8-9 to take the championship outscoring their opponents 24-5. (Contributed)

Shelby County (8-0) defeated Horseshoe Bend 4-3, and then shutout Randolph County 6-0 on the first day of play.

Anna Morgan Couch pitched a no-hitter in four innings in the victory over Randolph County. Brianna Buie went 2-for-2 with a double, RBI and two runs scored.

Shelby County picked up wins over Piedmont, Randolph County and Ider on their way to the tournament title March 9.

The Ladycats shutout Piedmont for a 5-0 win. Couch pitched five innings with three strikeouts while allowing only one hit. Kaitlyn Paschall went 3-for-3 with two RBIs and a run. Brittany Lansford added a 1-for-2 effort with a double and two runs scored.

Shelby County defeated Randolph County 4-1 to advance to the championship game. Paschall allowed one run on six hits with eight strikeouts in the victory. Buie and Paschall each doubled to lead SCHS at the plate.

The Ladycats wrapped up the tournament title with a 5-1 victory over Ider.

Shelby County held a 2-0 lead before striking for three runs in the sixth to seal the win.

Paschall pitched seven innings and allowed one run on three this with four strikeouts. Paschall and Sara Catherine Nash each added a 1-for-3 efforts at the plate with two RBIs. Lansford finished 1-for-2 with a triple.

FROM STAFF REPORTS MONTEVALLO – The University of Montevallo baseball team swept visiting Flagler College in a doubleheader in the first... read more