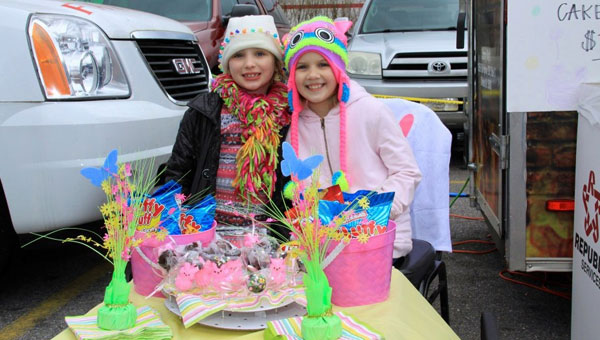 For $1 Monday, customers got all the yogurt they could fit in a yogurt cup.

A portion of sales on Tuesday, “Spirit Night,” goes to Chelsea schools. “The classroom with the most visitors that night wins a party with our pig,” Owner Miranda Carter said. “Same thing Wednesday night (Church Night),” when a portion of sales goes to local churches.

On Thursday night, Casey Morris will wait tables, with his tips and a portion of sales going to Chelsea Relay For Life, the fundraiser at the high school for the American Cancer Society, Miranda said.

Miranda pushed hard over the years for Chelsea to have its own Relay, she said, so she will always do what she can to help support it. However, she has passed on to Casey her seat as chair of the event.

“He is a big supporter as well and is very well liked in our community, so I’m expecting a big turnout to come see him wait tables.”

On Friday, Spin the Wheel Day, “you could pay more or less than our usual price (for yogurt) when you spin,” Carter said. Patrons can also win t-shirts and other prizes on the wheel, she said, and if customers guess exactly how much their yogurt weighs, they get it free.

Saturday will be a big day with a sidewalk sale and bounce house. They have several vendors signed up, and people can bring items to sell that day. All they ask from people selling their items is a donation for their Relay For Life team.

“We are excited about Jilly Beez being here to sell some of their antique collectibles and décor,” Miranda said, adding that her 6-year-old daughter Juliana will “be launching her new Cakepop Factory” at the sidewalk sale.

“She is on a mission to steal a little of my thunder. She wants to be the youngest female business owner in Shelby County,” said Miranda.