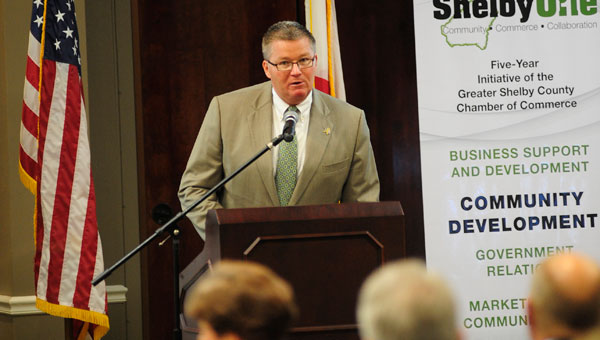 For the first several months of his tenure at the helm of Shelby County’s economic development engine, sounds from Kirk Mancer’s alarm clock started filling his bedroom before the sun’s first light.

Like hundreds of thousands of people who work in the Birmingham metropolitan area, Mancer got out of bed, got ready for his day at work and then hopped in his vehicle to commute to his office. But while most in central Alabama only commute across the county line or into downtown Birmingham, Mancer’s commute was a bit more extreme.

“It’s really not as bad as you would think,” Mancer said modestly of the nearly 140-mile round trip journey he made from Cullman to Pelham and back every weekday for months. “It only takes me a little over an hour to get here from Cullman.”

For months after Mancer became the new president at the Greater Shelby Chamber of commerce, he and his wife were working to sell their house in Cullman and move to Shelby County.

For Mancer and his family, working to quickly sell a house in today’s down real estate market gave the family a firsthand look at one of the problems Mancer and his staff at the GSCC work to combat every day. By providing resources aimed at strengthening Shelby County businesses, Chamber staff members strive daily to strengthen the county’s economy, which in turn benefits everything from the real estate market to city sales tax collections.

“The process of working at a chamber, it’s never the same thing every day,” Mancer said. “Each day brings an opportunity to help a business, which in turn helps strengthen the whole community.”

When he began his professional career, the thought of working with a chamber of commerce never crossed his mind. Mancer moved to the Birmingham area in 1989 to take a job with the Republican Party and then later became involved in the former Birmingham Fire team with the World League of American Football.

“I knew there was a chamber, but I didn’t think it was something I wanted to do. I don’t think anyone goes to school and thinks, ‘I’m going to work at a chamber of commerce one day,'” Mancer said.

When Mancer first heard of the GSCC president seat’s opening, it was a much different setting than a job interview for the position would have been.

His time with the state chamber of commerce association led him to a chance meeting with members of the GSCC board of directors. In January 2012, former GSCC President Jennifer Whisenant stepped down to become the executive director of the Birmingham Auto Dealers Association, launching the Greater Shelby Chamber’s search for a new leader.

GSCC officials initially approached Mancer and the state chamber of commerce association to request help with setting the salary for Whisenant’s successor.

“We knew that Kirk had just completed a salary study during his time at the state chamber of commerce association, and we wanted to see if he would share that study,” said GSCC Board of Directors Chairman David Nolen, who is a vice president at M&F Bank. “One of our board members had contact with him while he was still serving in Birmingham, and we were impressed with his experience.

“We felt he brought a lot to the table,” Nolen said. “He knew central Alabama, and he had that chamber leadership that we look for.”

Mancer said he was not expecting, at least initially, to apply for the spot with the GSCC until he was approached by a member of the chamber’s board of directors.

“One of the individuals (with the GSCC board) said ‘Why don’t y’all talk to Kirk?” Mancer said. “I interviewed for the position and I said ‘If y’all think my skill set would be worthwhile, I would be honored.'”

Mancer edged out 34 other applicants – some from as far away as Massachusetts – for the GSCC leadership position, and had his first day on the job on July 1, 2012.

The GSCC post marks Mancer’s latest in Alabama, where he moved in 1989 after growing up in Philadelphia. When Mancer, now a father of twins who recently started college, returns home, his friends and family members point out his acquired Southern dialect and frequent use of the word “Y’all,” he said.

Mancer, an alumnus of Washington and Lee University, has also adopted one of the South’s favorite pastimes.

“We try to keep it a secret around here that Kirk is a Tennessee fan,” Nolen said with a laugh.

Each day in the GSCC’s office behind the Pelham driver’s license office, you are just as likely to hear the chamber staff laughing as you are to hear them speaking with business owners and making plans for future events.

One of Mancer’s co-workers, April Stone, quickly coined a term to describe Mancer’s mixture of professionalism and humor.

“I call him professionally approachable,” Stone said with a laugh. “Sometimes he will say something and you can see the mischievousness in his eye. It kind of reminds me of my son, actually.”

Although Mancer is quick with a joke, he can switch into business mode at the drop of a hat, Stone said.

“We can all cut up and laugh one minute and then go straight back to taking care of business the next minute,” Stone said. “My first impression of Kirk was that he was genuine, and that has proven to be true.”

Mancer is also working to strike a balance between business development and quality-of-life issues in Shelby County through the chamber’s Shelby One campaign, which kicked off in late summer 2012.

Through Shelby One, Mancer and the chamber are working to raise $1.7 million between now and 2016 to help bolster not only economic development, but other issues such as transportation and education.

“The strategic planning committee met for almost a year about the goals and what we wanted to accomplish with Shelby One,” Nolen said. “After (Whisenant) left, it behooved us to try to find a good individual to lead that effort.”

Mancer said ensuring Shelby One’s success will be one of his primary focuses over the next several years. The purpose of the program is to focus on business support and development, community development, government relations and marketing and communications.

“I am tasked with producing measurable, tangible results in those four areas (outlined in the program),” Mancer said. Although he has been on the job for less than a year, Mancer has already garnered a good reputation with the Shelby County business community.

As a businessman, Nolen said he has a vested interest in Mancer’s success.

“I see him as someone who will continue to make Shelby County a great place to work, live and own a business,” Nolen said. “Everyone who has had contact with him has related very positively with Kirk.”