Profile: A place for children

“If I had kept my mouth shut, it would have been easier.”

Those are the words a young abuse victim said to Shelby County District Attorney Robby Owens decades ago.

At the time, Owens was serving as the assistant district attorney in Jefferson County’s Bessemer office. The child’s sentiment was not unusual. In the 1980s, child abuse victims typically had to sit through up to 15 interviews with investigators, law enforcement officials and counselors as their cases were investigated. 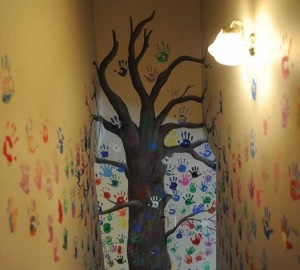 Child abuse victims and sometimes their family members leave handprints on a mural of a tree downstairs when they complete their time at Owens House — a sign to future visitors that others have walked in their shoes. ABOVE LEFT: Art created by victims and counselors hangs on the walls throughout Owens House. (Photo by Jon Goering.)

“Before we would treat them pretty much the same as an adult,” Owens said. “What we found was we really were re-abusing children.”

Bud Kramer, who was Huntsville’s district attorney at the time, was the first to come up with the idea of a child advocacy center in Alabama. The idea quickly caught on, and Owens was tasked with developing a similar center for Jefferson County.

In the 20 years that have passed since its founding, the center has served thousands of children and families through therapy, forensic interviews, abuse prevention programs, support groups and more. In 2011 alone, the center conducted 200 forensic interviews, 1,108 counseling sessions, 30 parenting class sessions and taught body safety training to 5,136 schoolchildren.

In the years Owens has spent prosecuting sexual abuse – and finding ways to prevent it – he has never seen a pattern in the victims.

“We see a huge range from every area of the county, from poor to very wealthy families,” she said.

Greer said approximately one in four girls and one in six boys will be sexually abused before they turn 18.

The organization does see more girls than boys and more white families than black or Hispanic families, but Greer hopes the recent addition of a Spanish-speaking counselor will make Owens House more accessible.

Greer has been with Owens House since its founding. She was part of the original team Owens consulted, back when she was with the county’s Department of Human Resources.

She’s seen some changes in abuse. Technology has made it much easier for predators to have access to and “groom” children. She also thinks television and technology have desensitized children to sex and violence to some extent.

One thing that hasn’t changed is the relationship between victims and their abusers.

“The thing that the public doesn’t seem to get is that in 90 percent of the cases the perpetrators are people they know and trust,” she said.

“This is the one case, at least in my observation, where there aren’t any witnesses,” Lee said.

While working in Bessemer, Owens noticed a connection between child sexual abuse and criminal activities down the road. He said many of the defendants in his office admitted to being sexually abused as children.

“It was fairly constant,” he said.

Prosecuting the cases was also expensive.

“It’s extremely expensive on society,” he said. “They became a drain on society rather than a productive person.”

It took Owens a little over a year to get Owens House off the ground.

Lee saw firsthand how Shelby County’s approach to child abuse changed and how the new method is better for victims’ long-term recovery.

Lee, who began her career as a clerk in 1991, left the Shelby County court system and returned in 1995 as an attorney.

“(Owens) is the one that put the team together,” Greer said. “It involved the sheriff’s department and DHR and a couple of law enforcement agencies and the Shelby County Board of Education.”

Owens first approached the Shelby County Board of Education, which allowed the center to rent a building in Columbiana for $1 a month. He also began a fundraising campaign to remodel the building and pay utilities.

The first year, Owens House employed a single person, and the organization scheduled 121 forensic interviews, which were conducted by the Department of Human Resources.

Owens House moved into its current building in 1997 with the help of a building campaign and a grant.

With the expanded building, Owens House also increased its staff. Today, the center employs four full-time staffers. In addition to Greer, Owens House has two counselors and a family advocate, and it conducts its own forensic interviews.

Today, a case typically begins when the child confides in someone — a teacher or parent.

“You have certain people who are required to make reports if a claim is made — a school teacher, for example,” Owens said.

Reports are typically made to DHR or law enforcement, but Owens House is involved early in the process. If the child is in the home with the alleged abuser, case workers will intervene immediately. Otherwise, the family will set up an interview at Owens House.

The victim sits down with a case worker for a forensic interview — when the interviewer gathers information about the alleged abuse. The case worker gets to know the child and assesses his or her ability to communicate before they discuss the abuse.

“A lot of kids, given the opportunity, will tell what happened,” Greer said.

The interviews take place at Owens House in one of two small rooms, which are filled with dolls that are used to help younger children with the process.

A camera provides a live feed of the interview, which a detective and representatives from DHR and the district attorney’s office watch in another room. The officials may request that the case worker ask follow-up questions.

The interview is also recorded.

“Probably 75-90 percent of these cases settle because of that tape,” Owens said.

For the cases that don’t settle, Owens House remains an important part of a victim’s preparation for trial, which typically happens a year or more after disclosure. Counselors will discuss how the process works with the victim, and Owens House even has a miniature Shelby County courtroom to use as a demonstration.

All children have their mental and emotional health assessed and are offered free counseling. Greer said children often will reveal more about their abuse over time.

“What we’ve found is disclosure is a process,” she said. “Kids will usually tell you a little bit more.”

The center has placed an emphasis on educating children and the public about child abuse and good parenting practices. The center offers night parenting classes in a 10-week program.

The prevention program grew significantly in the last year. Owens House counselors visit schools across the county to discuss body safety for students in kindergarten-third grade and conflict resolution for fourth and fifth graders.

Occasionally, former child abuse victims will return to Owens House, either to volunteer or even receive more counseling. Victims who were abused at a young age are likely to come back when they hit their teens.

Owens, however, is happy that he rarely sees child abuse victims once their cases are closed. He said the number of former child abuse victims who later end up in his office as criminal defendants has decreased — a sign, to him, that Owens House is doing its job.

“When you treat (child abuse) properly,” Owens said, “you recover from it.”