For Leslie and Teresa Whiting, community service is both a way of life and way to serve God.

For 20 years, the Columbiana residents have made regular trips to the Shelby County Jail.

Leslie is the chaplain of the jail, and the couple makes regular visits there to minister to the inmates. They collect and distribute Bibles, organize holiday fundraisers or simply lend a sympathetic ear. Leslie also oversees the volunteer program — recruiting, performing background checks and managing those who donate their time to the inmates.

The Whitings are reluctant to talk about their service, which they said they are called by God to do. 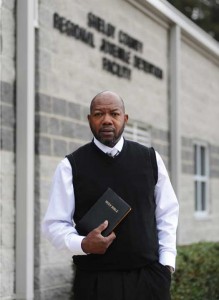 Leslie Whiting is chaplain of the Shelby County Jail.

Sheriff Chris Curry, however, is quick to praise the couple.

“It is my belief, that their presence, their message is a contributing factor to us being able to maintain the jail as peaceful as it is,” he said.

The Whitings both have full-time jobs outside the jail ministry. Leslie is a U.S. Postal Service worker and a newly elected member of the Columbiana City Council, while Teresa is a teacher at the Shelby County Juvenile Detention Center. They are also co-preachers at The Church at Columbiana.

Leslie said God has called the couple to serve their community, and they simply do their best to follow his will.

“You don’t always know what his plans are,” Leslie said. “You just want to walk where he wants you to walk.”

From volunteer to chaplain

In 1992, Leslie received a phone call from a friend asking if he would go into the jail to preach. He originally ignored the request, but the friend was persistent and gave Leslie a phone number.

Leslie called the number and got the former chaplain of the Shelby County Jail, who invited him to volunteer. After eight months, Leslie received another call — this time from former Sheriff James Jones, who asked if he would be interested in serving as chaplain.

“I told him I had to pray about it and talk to my wife about it,” Leslie said.

For Teresa, the decision was easy. She struggled with a debilitating illness — severe dysautonomia, a disease of the automatic nervous system, and major depression — in the early 90s.

“I just want to impart what I have, what I have been given,” she said. “I was disabled and sick for four years and I know the power of God and his word. I just want to share hope with others.”

While Leslie oversees the entire volunteer program, as well as serving as chaplain of Shelby County’s juvenile detention center, Teresa has played a large role in ministering to the female inmates.

The Whitings have been married for 33 years and have three grown children and six grandchildren.

The couple found they have similar interests and outlooks on life.

“One of the things my dad always said was be involved with the community, be involved in the place where you live,” Leslie said.

That attitude has shown through in their work at the jail, according to Curry, who described the Whitings as having “servants’ hearts.”

Leslie has been the only person to serve as chaplain during Curry’s tenure as sheriff. Curry said Leslie oversees the entire jail ministry and brings anywhere between five and 25 volunteers with him on each visit.

If an inmate experiences a family death, Leslie is usually the one who bears the news. Or, if an inmate is simply struggling with incarceration, Leslie lends an ear.

Curry said when tensions are high in the jail, Leslie acts as a calming influence.

“Leslie and his wife are both very respected in the jail. I say that because they both approach it with a giving spirit. They’re not there to make a moral judgment,” he said.

Teresa said the couple truly cares about the inmates. They offer their friendship and support to the inmates even after they are released from the jail. Some inmates take them up on the offer, and the Whitings have maintained contact through phone calls and letters.

The Whitings see their work in the jail as a way to bring people closer to God, but Teresa said that doesn’t happen until they’ve gained the inmates’ trust.

“One of the things that (Leslie) says that rings to be so true — and we’ve seen this manifest in so many ways — is that people don’t want to know what you know until they know that you care,” Teresa said.

“The need is met”

Ministering to Shelby County’s inmates, which can number up to 512 but is typically in the 300s, is not an easy job. The Whitings say it would be impossible without the help of volunteers and donations from the public.

“The need is always met,” Teresa said. “That’s been the miracle for us.”

After the new jail was opened in 2004 the Whitings worried because it was much larger than the old jail — and it was soon filled with inmates. The Whitings found they had enough volunteers to serve during visits to the jail, but they were still concerned about donations, especially during the annual Christmas celebration. Each year, however, the community has responded with more than enough donations.

During Christmas, the Whitings and the volunteers give each inmate a bag full of donated sweets in mid-December. Leslie said the food is meaningful to the inmates because some don’t receive gifts because of financial issues, or they are estranged from their families.

With Sheriff Curry, they also serve Christmas meals to the inmates and offer milk, tea and orange juice, which aren’t available during the year.

The inmates’ response makes the effort worth it. Teresa said the women often write and perform plays when the volunteers visit for the holidays. They also make Christmas cards for the volunteers —using Skittles for to make color.

“It’s just amazing some of the innovative ideas they come up with to show their gratitude,” she said.

Teresa said she encourages the inmates and her students at the juvenile detention center not to allow their situation to dictate the rest of their lives.

But, she said it’s the actions of the volunteers, as well as their constant presence at the jail, that makes it possible for them to connect with the inmates.

“That caring and that love opens the door for the gospel,” she said. “Truly, without love we have nothing.”