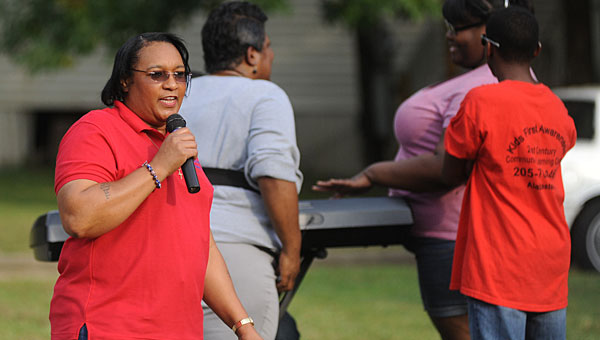 Cindy Hawkins lifts the framed, faded 1999 Shelby County Reporter article off its hook in her office in what used to be a bedroom in a public housing development in Alabaster’s Simmsville community.

“This is where it all began,” Hawkins said as a smile stretched across her face.

The small article and photo, titled “Neighborhood gathers for anti-drug party,” details the first event Hawkins and her husband, Oscar, helped organize for children facing obstacles ranging from drug use to academic challenges.

The block party, which featured a cookout, several churches and involvement from the Alabaster Police Department, marked the first step in a journey aimed at giving a community the resources to build hope and opportunity.

“A lot of the kids didn’t have the resources they needed to better themselves,” Hawkins said. “We wanted to do something to help. We wanted to show the kids that if you work hard and do the right things, everything else will fall into place.

“It’s not a black thing or a white thing. It’s a people thing. We want to help people,” Hawkins added.

The Hawkins, who moved here from Atlanta in 1997 after visiting Oscar Hawkins’ family in Alabaster, said they started hosting the block parties after noticing many of the area’s children were falling behind in school and had few resources to help them realize their potential.

Seeing the community come together during the September 1999 block party to promote the importance of staying off drugs and staying in school ignited a fire for Hawkins – the flames of which still burn more than 13 years later.

Hawkins’ block parties in Abbey Wooley Park grew every year. As her involvement in the community began to have a positive impact on the city’s children, other groups took notice.

After three years of block parties, The Columbiana Housing Authority, which operates the public housing development on what is now Mt. Olive/Martin Luther King Jr. Road, approached Hawkins with an offer.

“They called and asked me if I wanted a unit,” Hawkins said.

On July 20, 2002, the Kids First Awareness Community Learning Center opened, sharing space with the Alabaster Police Department’s precinct unit. After two years in the precinct unit, Kids First moved a block away to its current location in what used to be a SafeHouse building, Hawkins said.

Through the center, Hawkins and several volunteers sought to provide a safe, constructive learning environment for kids in Alabaster who may not otherwise have one after school and in the summer.

In the center’s early days, a handful of children came to Kids First after they got off the school bus. There, the kids were given a snack, school tutoring as needed and a safe place to play with their friends.

Although the center has grown to a daily attendance of 40 or 50 kids, there was a period when the center’s operators didn’t know if they would be able to operate the center one more day.

“I’ll be honest with you, the first three years I didn’t think we were going to make it,” Hawkins said. “For a while, I would empty a bunch of ramen noodles into a bowl, cut them up and pour them into Styrofoam cups as snacks for the kids.”

The center quickly caught the attention of Joe Raines, who at the time was the pastor of Alabaster’s First United Methodist Church. Since attending one of the initial Kids First board of directors meetings, Raines has been “involved ever since.”

“The center was really running on shoestrings and prayers back then,” Raines said. “We had no funding other than what came out of the board members’ own pockets.”

Raines’ involvement with Kids First drew the attention of Alabaster’s church community, which eventually led to more monetary and volunteer support flowing in.

“For a while, we were struggling from month to month. But Cindy refused to give up,” Raines said.

Hawkins said it sometimes was tough to keep fighting through the center’s early struggles, but said overcoming them helped the center prove its determination to the community.

“It was so hard. I was literally begging for money back then,” Hawkins said. “I actually gave up at one point, but I didn’t give out.

“I woke up one day and said ‘I don’t know if I can keep doing this,’ but my husband said ‘Just give it one more day,'” she said. “One more day turned into 10 years.”

From hardship to success

After Hawkins and her volunteers overcame the center’s early struggles, blessings started raining down on Kids First.

After gaining local, county and state attention and support, Kids First was able to add a playground, a new basketball court, purchase new computers, place a mobile classroom behind the building, purchase a bus to transport kids when necessary and much more.

With the help of more volunteers, the center has been able to raise kids’ grades, help them cut down on school disciplinary problems and learn the importance of giving back to their communities.

Because Kids First initially only served children younger than 18, the center in late 2012 teamed with the city of Alabaster to launch the HOPE program. The HOPE program offers free classes for adults ranging in topics from nutrition and exercise to computer skills.

“Our hope is that our high school kids will graduate right into that adult program after they turn 19,” Hawkins said. “It’s like it’s come full-circle now.”

Another person looking to come full-circle after growing up in the Kids First program is Alabaster native Tashira Harris. Now in her freshman year at Miles College, Harris said Hawkins and the Kids First volunteers have had a tremendous impact on her life.

“I would not be in college right now if it weren’t for Kids First,” Harris said during a break between classes in fall 2012.

After her mother signed her up for the program, Harris began spending time at Kids First when she was 8 years old. As she got older, Harris took on a leadership role at the center and started tutoring and mentoring Kids First’s younger members.

Her experience in the program played a major role when she was selecting her course of study at Miles College.

“I am majoring in business administration, and I would like to get a minor in childhood development,” Harris said. “I would like to open my own daycare and help people the way Miss Cindy helped me.

“Kids First taught me not to get involved with the wrong crowd, and it helped me to raise my ACT score so I could go to college,” Harris added.

Hawkins said she takes great pride seeing kids succeed and move on to the next steps in their lives. Over the past 10 years, the center has served more than 500 kids, and has helped several of them go on to college.

“At the end of the day, we want them to have a better life than they did before they came here,” she added.

Hal Woodman’s “No Sleep in Helena” blog has grown from a way for him to keep up with family members... read more