By GRAHAM CARR/Special to the Reporter

Last season, Danny Young did something no men’s college basketball coach has ever done at Auburn or Alabama. Young guided the University of Montevallo Falcons to the national championship game.

The Falcons fell just short of winning a ring, falling 72-65 to Western Washington University in the Division II Championship.

“We could never really get it going,” Young said. “I don’t know if we were tired or what.” 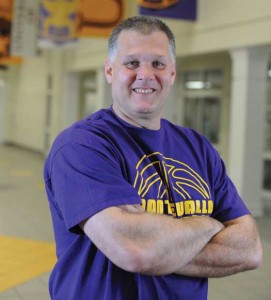 Danny Young is the basketball coach at the University of Montevallo. (Photo by Jon Goering.)

Hired in 2003, Young passed former Falcons coach Bill Elder as the winningest coach in Montevallo history midway through last season. Before the start of the 2012 season, Young had compiled a 206-87 record at Montevallo and had led seven of his nine Falcons teams to the NCAA tournament­ — three of which advanced to at least the Elite Eight.

Senior forward Marvin Fitzgerald believes Young is not only a great coach, but a man of great character.

“One thing, I can say about coach Young is he is a fair man,” Fitzgerald said. “Most coaches just tell you something, and then it will be a whole different thing when you get there. He is an honest man and a man of his words.”

Growing up, the Arizona native was a star basketball player getting noticed by one of the top high school all−star games.

“I got nominated to be in the McDonald’s All−American game — didn’t play in it,” Young said.

His high school success catapulted him into a college career at Grand Canyon University in Phoenix under Coach Paul Westphal. Westphal became known later for leading the Phoenix Suns to the 1993 NBA Finals, before losing to Michael Jordan and the Chicago Bulls.

After receiving his degree in physical education in 1990, Young played professionally for two years.

It was as an assistant at SIU when Young worked under the person who shaped him into the coach he is today.

“I learned a lot from Mike Carey,” Young said. “He was the head coach at Salem when I was there. He was an outstanding coach.”

After Carey took the job as head women’s basketball coach at West Virginia University, Young was promoted to his first head coaching job. In his two seasons in command at SIU, he posted a 51-11 record, while also winning the West Virginia Intercollegiate Athletic Conference Championship his final season.

In Young’s first season at Montevallo, he led the Falcons to their biggest turnaround in school history by winning 23 games, which was 19 more wins than the Falcons had the previous season. Young has sustained that success by winning an average of almost 23 games a year and keeping a winning percentage of more than 70 percent.

The disappointment of falling just short of a championship last season still hurts deeply in the hearts of the Falcons, but they are using it as motivation for the current season.

“I don’t know if they realize how hard it is to get back,” Young said with a laugh. “Everything has to go right for you to make it that far. There is a little bit of luck with this game. I think the leadership is there. The older guys have stepped up and are always demanding the performance I expect.”

He said it helps that the Falcons have seven returning players, five of which started at least a game last season, to fuel the Montevallo attack.

Building Montevallo into a successful program has not been easy for Young, especially, when recruiting against the bigger in-state schools for the same players.

Fitzgerald was one player that went against this trend. After going to junior college, Fitzgerald went to North Carolina Central University, but decided to transfer after one season at NCCU. He said Young was one of the main reasons he considered transferring to a Division II school before last season.

“I was going to go to back to Division I, but I didn’t want to sit out a year,” Fitzgerald said. “I just wanted to straight play. I heard they had some nice pieces and just needed a few more pieces to have a great team. I gave it a chance and came here.”

He said he has not regretted his decision and being able to play under Young has been great experience.

“I see him as one of the best coaches I have played for,” Fitzgerald said.

As his coaching career has progressed, Young’s goals have changed.

“I used to think that everyone will move and take the big Division I job,” he said. “But that just doesn’t happen. I probably have not been that great of a self-promoter. I do not go out and search for the big jobs.”

Working at Montevallo has been a joy for Young.

“This has been a really great place for my family,” Young said. “When I first came here, I used to tell people that Montevallo is the best kept secret in Alabama.”

When he is not trying to win national titles, he spends time with his wife, Sabrina and children, Caleb, Sophia and Cole.

“I don’t do much,” Young said. “I usually go home and do something with the kids.”

Young attributed his past success to several people in his life.

“I think you would have to give all the credit to everyone because everyone has to come together and buy into the same thing,” Young said. “I have done the same thing for years, and I will probably not change because it has worked for us for years.”

Young would like to keep coaching for as long as Montevallo will have him, but he said the key to sustaining his success is continually getting players who share similar beliefs.

Young is a tough-love coach, but he cares about the well-being of his players, Fitzgerald said.

“He doesn’t sugarcoat anything,” Fitzgerald said. “He doesn’t tell you something you want to hear, but he tells you the truth. He doesn’t tell players ‘You can be this, or you can be that,’ but he says, ‘If you don’t do this, you will turn out to be this way.’ As a player, if you play hard for him, then everything else will work itself out.”

Despite his success, Young stays motivated because he has yet to mark off his ultimate objective.

“Your goal is always to win a national championship,” he said. 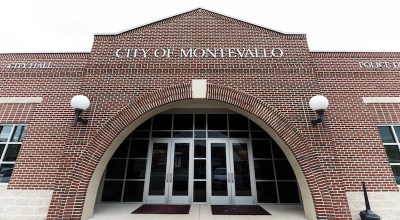