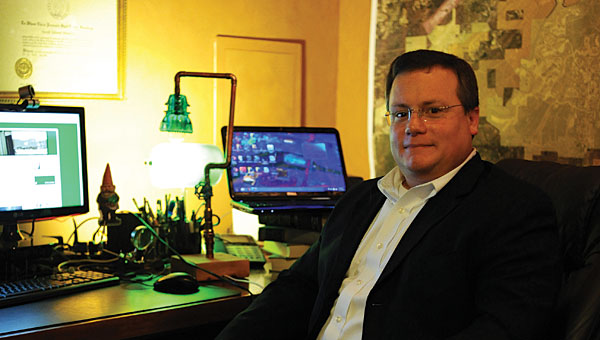 Hal Woodman’s “No Sleep in Helena” blog has grown from a way for him to keep up with family members to a popular information source for Helena residents. (Photo by Jon Goering)

Hal Woodman’s daily journey begins a little before 3 p.m. almost every weekday. After taking a shower and getting dressed, Woodman walks to the school bus stop to greet his daughter, Kylie, as she ends her day at Pelham High School.

Woodman then spends time with Kylie while she starts tackling her homework. The next step in his routine typically leads Woodman to a laptop or desktop computer to check his email, search the web pages of local news outlets, check his Twitter feed and scour his Facebook page – all while gathering any kind of information related to Helena.

After gathering the day’s Helena-related news, Woodman, whose online handle, “Hewy,” is his childhood nickname, compiles the information in order of importance, inserts pictures where appropriate and drafts the day’s blog post before looking over it one last time.

After eating his first meal of the day, Woodman pastes the post onto his Blogspot website and sets the post to go live in the wee hours of the morning before setting off to work from 11:45 p.m.-8 a.m. maintaining computer systems at a large insurance company in Hoover.

“I try to write the post before I go into work, but it doesn’t go live until later that night. I don’t want people to think I am sitting around doing the blog while I am at work,” Woodman said with a laugh.

Woodman takes his “lunch break” at about 4 a.m. and returns home a little after 8 a.m. to get a good day’s sleep. The hours give Woodman access to great parking wherever he goes, allow him to travel opposite traffic going and coming from work and play in perfectly to what has become one of his biggest passions.

When Woodman’s day is coming to an end, thousands of Helena residents – both past and present – begin their days by pulling up Woodman’s “No Sleep in Helena” blog at Helena-alabama.blogspot.com.

Today, the blog, which is updated every weekday, is chock full of every kind of Helena news imaginable. Whether it’s links to local news sources, pictures from community events or announcements for Helena happenings, Woodman’s blog has become a staple in this city of nearly 17,000 residents.

From family to lost sleep

The No Sleep in Helena blog’s genesis differs greatly from its current form.

When Woodman moved from Montgomery to Helena in 1999, he had already been dabbling with virtual bulletin board programs for several years.

Building off his previous net knowledge, Woodman started a blog primarily to stay in touch with his family and keep track of events in his new Helena home.

“I would post about events just so I could remember them,” Woodman said with a laugh.

As more people learned about Woodman’s blog, its popularity exploded.

“Everybody would get on there and post about their family. I started getting a lot of feedback,” Woodman said. “I decided to start posting about events and news, and it kind of took on a life of its own.

As his blog began picking up momentum, Woodman decided to stay anonymous by using the “Hewy Nosleep” moniker.

The nickname protected Woodman’s privacy, but it may have had a negative impact during his first bid for political office in Helena.

“For a long time, nobody knew who Hewy Nosleep was,” said Helena mayor’s assistant Joy Childers, who has been living in Helena for more than 40 years. “Four years ago, he ran for a spot on the council, and I don’t think anyone knew who he was. After that election, his name started to come out a little bit.”

Woodman is adamant about keeping his blog as a community resource, and said he does not want to use it to campaign or promote his personal goals. During the election season, the blog advertised every Helena campaign event, Woodman’s or otherwise.

“Everybody keeps telling me that I won’t be able to do the blog after I get on the City Council, but I want to post about my experiences. I want to do it like a continuing-the-journey kind of thing,” Woodman said. “I think people would be interested in reading about what it’s really like.”

Attend an event with any kind of Helena connection, and you are likely to see Woodman helping to set up tents, park cars or anything else pivotal to the event’s success.

Woodman’s dedication to Helena doesn’t end at the keyboard, prompting many to take his blog’s name seriously.

“We truly believe that Hal doesn’t sleep,” Childers said. “I think that only young people can go like that. I would be a zombie if I worked all night and then went to as many things as he does.”

Woodman said he does everything in his power to ensure Helena events are as successful as they can be.

“I think that there are a lot of cool events that happen, but they fail because nobody shows up,” Woodman said. “There is nothing worse than having something great that nobody shows up to.”

The blog, a nocturnal work schedule and his community involvement do not keep Woodman from his family. If anything, the community gives the family a better chance to be together.

Woodman’s daughter, Kylie, a sophomore at Pelham High School, has learned some valuable life lessons from her father’s blog. Kylie has tagged along with her father to events ranging from council meetings to the Buck Creek Festival, and sometimes helps Woodman collect information and take pictures for the blog.

Through her work with the blog, Kylie said she has learned it is easy to get involved in her city’s happenings.

“I think it sort of shows that it doesn’t take that much effort to get involved in your community. You just have to know where the events are happening,” Kylie said. “Before my dad’s blog, I probably wouldn’t have volunteered for those things.”

Woodman’s family – which includes wife, Kyra, and children Kylie, Haley and Alex – has grown accustomed to meeting Woodman’s fans while out and about, especially since he won a spot on the City Council.

“Last year, I was a freshman at Pelham, and all my teachers saw my name and asked me if my dad did the No Sleep in Helena blog,” Kylie said with a laugh. “Everybody asks me about it.”

Woodman said he uses his online pastime to help instill future lessons to his three children.

“Another good thing about it is that you get to volunteer and meet people,” Woodman said. “I hope in some way that this will encourage my kids to be involved in their communities wherever they go in the future.”