More than two years have passed since Dr. John W. Stewart III took the helm as president of the University of Montevallo, but he’s still brimming with enthusiasm about his role.

He’s quick to share stories about students’ successes or a faculty member’s new project. He’s a regular presence on campus – cheering on the Falcons at basketball games, lighting the anagama pottery kiln and greeting visitors at Christmas parties at Flowerhill, the president’s mansion.

Stewart’s enthusiasm is not misplaced. UM had a banner year in 2011-2012. The school jumped four spots in the U.S. News and World Report’s best public colleges in the South ranking. Enrollment increased, and the Falcons made it to the Division II NCAA Championship in basketball. 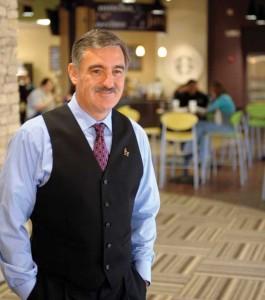 Stewart joined the University of Montevallo in August 2010. (Photo by Matthew Orton.)

The current school year is also shaping up to be a winner with enrollment and alumni giving rates on the rise. The biggest news is the university’s partnership with the City of Montevallo and Shelby County, which is intended to revitalize both the school and the city.

Stewart said he knew UM was a great college when he took over as president. He has focused his energy on sharing that fact with others and ensuring the university receives support to improve in the future.

“I think our marching orders as an administration are to go out and tell our story so that more people know,” he said. “The enterprise of teaching and learning is what we’re all about. We’ve been doing that right for a long, long time, and now we need to tell the world about it.”

FROM BUSINESS TO ACADEMIA

Stewart joined UM as its 15th president in August 2010.

The Delaware native brought with him a mix of both professional and educational experience.

He spent about 15 years working for an industrial contracting company in Delaware before he joined the world of academia full-time in 1997.

In addition to teaching, Stewart found success in fundraising and held development positions at the University of Southern Mississippi, Swarthmore College and William Carey University.

He found working in administration to be a fulfilling way to merge his professional and academic experience.

“I felt like going into administration would be a way I could leave an impact on the direction of a university and execute on a vision. That was very exciting to me,” he said.

His final stop before coming to UM was Flagler College in St. Augustine, Fla., where he served as the vice president for institutional advancement and raised $30 million in three years.

His arrival at UM was not ideal – many students and faculty were upset at the departure of previous president Philip Williams – but Stewart said the transition was fairly smooth.

“I wasn’t nervous after I met my colleagues,” he said.

Michelle Johnston, senior vice president of administrative affairs, said the administration and trustees appreciated Stewart’s support of the strategic plan. She also said Stewart has succeeded in “really putting Montevallo on the map in terms of awareness.”

“I think he’s seemed very much up for the challenge,” she said.

Stewart has set his sights on growing enrollment and re-energizing UM’s marketing efforts.

Stewart said the school wants to grow its undergraduate enrollment from 2,500 to 3,000 students.

“As of the first day of school (in fall 2012), the freshman class was 32 percent larger than it was two years ago,” he said. “The quality of our student has remained strong. We have not sacrificed our standards.”

To grow enrollment, the college has looked outside its traditional recruitment zone. In 2010, about 85 percent of UM’s students came from within 100 miles of the college. Now, the school attracts students from across the state, especially Mobile and the northern part of the state. Last fall, UM even recruited out of state.

Stewart said the new students give the university a “richer geographic diversity” and bring dollars from outside the county to Montevallo.

In increasing the college’s marketing efforts, Stewart said the public relations department has done a great job developing relationships with local media outlets. In addition, UM has allocated more money for advertising, increased its speaking engagements and contracted with a public relations firm for branding and marketing advice, which included launching a new logo in September 2011.

Johnston said the college’s fundraising efforts – alumni giving rates have risen significantly – and its partnership with the city and county have been Stewart’s biggest successes.

“I think that’s where Dr. Stewart has really flourished here,” she said. “I think the city and county partnership is a real feather in his cap.”

The partnership was announced in June 2012 and is intended to revitalize both the university and Montevallo’s downtown. Projects include promenades from UM’s campus to downtown and Montevallo on Main, which will create a UM presence in a building downtown. UM also partnered with Barnes and Noble as its campus bookstore, and the store will offer a wider range of items when it moves downtown from campus.

“That will put many, many students on Main Street, spending money and making a more vibrant downtown, an economically viable downtown,” Stewart said.

Stewart is quick to praise others for UM’s progress – faculty, administration and the board of trustees, as well as city and county leaders for the partnership.

“I don’t take a lot of credit for the good things that have happened,” he said. “I have a really, really strong senior administrative team … I’ve worked at good schools, and I would put the faculty here up against just about anywhere I’ve been.”

THE BEST OF BOTH WORLDS

Stewart’s own education has provided insight into UM’s operations. A product of both public and private colleges, he said UM is unique in the way it operates.

“A school like Montevallo is the best of both worlds,” he said. “You’re small enough to be nimble and creative in your management of the institution, but you have the strength and the solidity of support from the state.”

Even with increased enrollment, UM maintains small class sizes, while tuition, room and board cost about $13,000 a year. The individual attention and affordable price is one of UM’s biggest selling points, according to Suzanne Ozment, provost and vice president for academic affairs.

“This is a campus that is very, very student-focused,” she said. “This is not a place where a person who wants to get lost in the crowd will go.”

Offering affordable, quality education is a passion for Stewart.

While UM is ranked 38th among Southern universities by U.S. News and World Report, Stewart is more proud of another ranking from the same group.

“Of all the regional universities in the South, we’re ranked fourth at graduating students with the lowest amount of student loan debt. That’s a story in itself,” he said.

UM graduates finish college with about half the student loan debt as the national average.

Through the career planning programs, students learn to write resumes, interviewing skills and proper etiquette for business dinners and lunches. The program also assists students identify and apply for internships.

While UM, which is one of about 28 public liberal arts universities in the country, is best known for its arts graduates, Stewart said students in other majors, including business and health, have done well too.

“We’re certainly well known for our fine arts and performing arts, but we’ve also produced graduates who went on to lead in areas of social work, education (and) speech pathology,” he said. “We do a wonderful job putting kids in really rock star graduate schools.”

The college’s main focus is teaching students skills – critical thinking, writing – that will serve them no matter their profession.

With momentum building at UM, Stewart is looking forward to seeing the results of his administration’s efforts. More than anything, he hopes others also will acknowledge those results.

“I honestly believe than in five, six, seven years that the University of Montevallo is going to be known across the country as the model for affordability and quality in higher education,”